Players who are currently in the third year of their rookie-scale contracts will become eligible for contract extensions beginning on July 1, and will have until the start of the regular season to work out new deals with their respective clubs. For the most part, that group is made up of first-round picks from the 2014 draft, which means that plenty of promising young players will be up for extensions this offseason.

Former No. 1 pick Andrew Wiggins will be a top extension candidate for the Timberwolves, and other top-10 picks from 2014 – like Aaron Gordon (Magic), Marcus Smart (Celtics), and Julius Randle (Lakers) – figure to discuss new deals with their teams. Several players selected later in the first round, such as Gary Harris (Nuggets), Rodney Hood (Jazz), Clint Capela (Rockets), Jusuf Nurkic (Trail Blazers), and T.J. Warren (Suns) will also be viable candidates for extensions.

However, it would be hard to make a list of 2017’s top rookie-scale extension candidates that doesn’t include three players currently on the shelf due to injuries: Joel Embiid, Jabari Parker, and Zach LaVine. 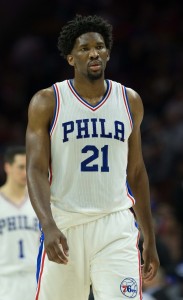 Embiid may be involved in the Rookie of the Year conversation for 2016/17, but he’s technically a third-year player, meaning the Sixers will be faced with a major decision on his future sooner than they’d like. Embiid, who won’t play again this season due to a knee injury, has only played in 31 games in his first three NBA seasons, a disconcertingly small sample size for the Sixers as they weigh a possible extension.

As impressive as Embiid looked during those 31 games this season, it’s hard to imagine Philadelphia making a long-term commitment to him in 2017 unless the team can get something done at a significant discount. Like the rest of his fellow rookie-scale extension candidates, Embiid would be eligible for restricted free agency in 2018 if he’s not locked up this year, at which point the Sixers would be able to match any offer sheet he gets.

If Embiid stays healthy – or at least healthier – in 2017/18, it would be an easier decision for the Sixers to go up to the max for him in the summer of ’18. If not, then perhaps other suitors will shy away from making aggressive offers in restricted free agency as well, reducing the cost for Philadelphia. Either way, it probably makes sense for the Sixers to take another year to gather more information on Embiid — if he proves worthy of a maximum-salary investment by that point, they’d certainly be happy to do it.

Unlike Embiid, who is expected to be ready to go to start the 2017/18 campaign, Parker is expected to miss a full year after tearing his ACL, meaning he may not get back on the court for the Bucks until about halfway through next season. Clearly, that’s problematic for Milwaukee — the club will likely have to make a decision on an extension for Parker when he’s still a few months away from playing.

Before going down last month, Parker was enjoying a breakout season, averaging career highs in nearly every key category, including PPG (20.1), RPG (6.1), APG (2.8), and 3PT% (.365). He likely would have been on track for an extension worth at least as much as Giannis Antetokounmpo‘s (four years, $100MM) if he had stayed healthy. But it remains to be seen if the Bucks will be willing to make a long-term commitment to Parker while he continues to rehab a second ACL tear.

If Parker is seeking financial security, and the Bucks are confident in his ability to make a full recovery, it could be a good opportunity for the team to roll the dice — something in the four-year, $70-75MM range might make sense for both sides. For Parker, it’s a huge payday that ensures he’ll be set for life no matter how his knees hold up going forward. For the Bucks, it would be Luol Deng money for a player who has the potential to develop into an All-Star. It would be a leap of faith, but with the salary cap set to exceed $100MM, such a contract wouldn’t necessarily be a huge albatross if Parker’s health prevents him from taking the next step. 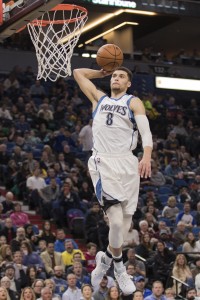 LaVine tore his ACL just a few days before Parker did, though the Timberwolves didn’t announce a timeline for his recovery, so it’s not clear if he’ll remain off the court until 2018 as well. Unlike Parker, LaVine had been relatively healthy during his first two years in the NBA, missing just five total games, so perhaps there’s more optimism about his ability to get back to 100%.

With Wiggins also up for an extension, and a big payday for Karl-Anthony Towns potentially coming in 2018, LaVine likely won’t be Minnesota’s top priority this offseason. Still, he shouldn’t be overlooked. Having increased his scoring average from 10.1 PPG to 14.0 PPG to 18.9 PPG in his first three NBA seasons, LaVine adds a dangerous scoring punch to the Wolves’ backcourt. The team may view him as a piece of a long-term Big Three, alongside Wiggins and Towns, so exploring an extension this fall makes sense.

As is the case in the other two scenarios, the Wolves would likely only re-up LaVine in 2017 if they can do so at a discounted rate. The club won’t sign LaVine to a max extension, but if he’s open to doing something in the Dennis Schroder range (four years, $62MM), I think the team would jump on it. If LaVine’s asking price is closer to the $84MM that a healthy Victor Oladipo got on his four-year extension with the Thunder, that would make it more difficult for Minnesota to pull the trigger.

One thought on “Injuries Will Complicate Key Rookie-Scale Extensions”