Spurs center Dewayne Dedmon will head back to the free agent market one year after signing with San Antonio, reports Shams Charania of The Vertical. According to Charania, Dedmon has decided to turn down his 2017/18 player option with the Spurs, and will become an unrestricted free agent in July. 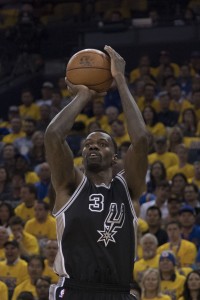 Dedmon, who signed a two-year deal with the Spurs last summer worth the team’s room exception, earned $2.898MM in 2016/17. His option would have been worth about $3.028MM, but after a solid year in San Antonio, the USC product should be in line for a larger payday, perhaps with multiyear security.

Dedmon appeared in a career-high 76 games for the Spurs in his first – and possibly only – season with the franchise. He also established new career bests in PPG (5.1), RPG (6.5), and FG% (.622), emerging as a key piece in the club’s frontcourt rotation.

It’s not out of the realm of possibility that Dedmon could sign a new deal with the Spurs, but San Antonio will likely have a few other contract situations to address this summer that may take priority. Additionally, it wouldn’t be surprising to see the team opt for a cheaper replacement — in recent years, San Antonio has let bigs like Aron Baynes and Boban Marjanovic sign elsewhere, replacing them with players on more modest deals.

Before he signed with the Spurs last July, Dedmon was linked to the Warriors, and Tim Kawakami of the San Jose Mercury News wonders (via Twitter) if Golden State could circle back to the veteran center this summer. If the Dubs stay over the cap to re-sign their own free agents, they’d have the mid-level and bi-annual exceptions available to pursue outside help.