JUNE 22: The trade is finally official, the NBA announced tonight during the draft. The Lakers used their newly-acquired 27th overall pick on Kyle Kuzma.

JUNE 20: The Lakers and Nets have reached an agreement on a trade that will send Brook Lopez to Los Angeles, according to Adrian Wojnarowski of The Vertical (Twitter link). Wojnarowski reports that the Lakers will also receive the No. 27 pick in this week’s draft, and will send D’Angelo Russell and Timofey Mozgov to the Nets. 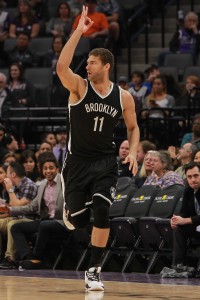 This deal is a fascinating one on several levels. For the Lakers, they manage to cut long-term costs by getting out from under Mozgov’s contract, which still has three years and $48MM left on it. In Lopez, the Lakers will acquire a more productive player on the court, and one whose deal expires at the end of the 2017/18 season, setting the franchise up to create an extra chunk of cap room when LeBron James, Paul George, and other stars reach free agency.

In addition to picking up Lopez, the Lakers will also get a third first-round pick in this Thursday’s draft. The team now holds the second, 27th, and 28th overall selections, and with Russell no longer in the fold, it appears more certain than ever that Los Angeles has its eye on Lonzo Ball with that No. 2 overall pick.

Meanwhile, the Nets will finally bring years of Lopez trade speculation to an end, sending him to Los Angeles with one year remaining on his contract. In exchange for Lopez, a first-round pick, and their willingness to assume Mozgov’s huge contract, the Nets will land their point guard of the future in Russell, the second overall pick from the 2015 draft. The team also hangs onto its second 2017 first-round pick (No. 22).

Russell, who is still just 21 years old, has faced scrutiny about his work ethic and his drive, but his talent is undeniable. In 63 games last season for the Lakers, the young point guard averaged 15.6 PPG, 4.8 APG, 3.5 RPG, and 1.4 SPG in a modest 28.7 minutes per contest. He has also developed into a reliable three-point threat, averaging 2.1 threes per game at a rate of 35.2%. He’ll be under contract for at least two more years, becoming extension-eligible in 2018 and RFA-eligible in 2019.

With Russell and Jeremy Lin now in the mix, the Nets are unlikely to be in the market for a point guard this summer, which means another potential suitor is off the board for top free agents at the position seeking a payday. Brooklyn had been viewed as a potential player for George Hill, among other free agent point guards.

Finally, the Celtics will be watching the outcome of this trade with a close eye, since Boston may end up with both the Nets’ and Lakers’ first-round picks in the 2018 NBA draft. With the draft and free agency still to play out, it’s hard to tell at this point whether either team will improve significantly in 2017/18, but Lopez was the Nets’ most productive player last season, so this isn’t exactly a win-now move for Brooklyn — that bodes well for the C’s.