Fultz showed flashes of brilliance in the NBA Summer League amid overall inconsistent play before he ultimately injured his ankle in his Las Vegas debut. The 76ers guard was promptly shut down for the remainder of Summer League. This season, the rookie figures to be a regular fixture in the Philadelphia backcourt.

After dominating his freshman season at UCLA, Ball won Las Vegas Summer League MVP honors, racking up assists (9.3 APG) and steals (2.5 SPG), as well as points and rebounds. Although it is not clear whether Ball will start for the Lakers right out of the gate, he will certainly be the beneficiary of a hearty amount of playing time.

Fox is also expected to see his fair share of action this season, but averaged just 21.3 minutes per game in four Las Vegas Summer League games. Like Fultz and Ball, Fox exhibited tantalizing athleticism. The Kentucky product averaged a solid 11.8 points per contest and 3.0 assists. Fox’s 2.3 SPG were extremely impressive.

The Knicks drafted Ntilikina eighth overall because of his speed and agility. Last season, the point guard averaged just 15.5 minutes per game for Strasbourg in France but displayed tremendous promise and improved noticeably as a shooter. With D. Rose out of town, it appears as if the keys to Madison Square Garden are about to be Frank’s.

In six games in Las Vegas, Smith averaged 17.3 PPG, 4.8 RPG, and 4.2 APG, shooting 45.7% from the floor and electrifying with the occasional powerful dunk. The Mavericks prospect also tallied 2.2 SPG.

This brings us to today’s poll: Which of these point guards will have the best rookie season in 2017/18?

Free agent news has dominated NBA headlines over the last week, but teams around the league are also taking care of the rookies they drafted last month, signing them to their first NBA contracts. Because cap holds for first-round picks now count for 120% of the rookie scale instead of 100%, there’s little incentive for teams to wait to lock up their first-rounders.

The value of those contracts depends on where a player was drafted. This year, No. 1 overall pick Markelle Fultz is in line for a four-year deal worth in excess of $37.4MM, which represents the maximum allowable 120% of his scale amount. No. 30 pick Josh Hart, on the other hand, figures to get a four-year contract worth just under $8.5MM.

Second-round picks, meanwhile, aren’t assured of two guaranteed seasons, though some players will receive them. Teams can sign second-rounders to whatever amount they choose, using cap room or various exceptions. Those players who immediately join their NBA teams figure to get a minimum salary or something slightly above the minimum. We’ll make a note of contract details for second-rounders below, as they become available.

Finally, some second-rounders – and perhaps even some first-rounders – won’t sign in the NBA immediately, heading overseas to refine their games while their NBA teams retain their rights. We’ll make note of that below too, wherever it’s applicable.

Here’s a breakdown of 2017’s draft pick signings. This list will be updated as more draftees sign their first NBA contracts:

Note: Players drafted in previous years who signed their first NBA contracts this offseason are not included here. They’ll be featured in a separate roundup.

Suns May Have Pushed Josh Jackson To Cancel Celtics Workout

There are rumblings out of Boston that the Suns may have encouraged Josh Jackson to skip his workout with the Celtics so he would be available for Phoenix with the fourth pick.

A. Sherrod Blakely of CSNNE passes along the theory that Suns GM Ryan McDonough, who spent 10 years in the Celtics’ organization, was behind Jackson’s decision to cancel a scheduled session with the team in Sacramento. McDonough joked about the situation Friday in Jackson’s introductory press conference, but later offered hints that there might be some truth to the allegations.

“Look, it is a competition,” he told reporters. “The Celtics were ahead of us at No. 3 and they could have selected whoever they wanted to. I think they got a very good player in Jayson Tatum, but that doesn’t mean [Jackson’s agent] B.J. [Armstrong] and I and … other members of my staff couldn’t talk and try to formulate the best plan to get a player we were really high on to a place we felt he really wanted to go and would be a great fit for him.”

McDonough pointed out that it wouldn’t violate any NBA rules if he and Armstrong had worked together to steer Jackson to Phoenix.

The Boston contingent, made up of president of basketball operations Danny Ainge, coach Brad Stevens and assistant GM and team counsel Mike Zarren, didn’t find out about the cancellation until their plane landed in Sacramento, which sparked some anger toward Jackson.

“Flew across the country, are you kidding me? I had to get up at 4 o’clock and fly back home,” Ainge said.

Jackson claimed he had a phone conversation with Stevens this week, but Ainge said on draft night that no one in the organization had direct contact with the Kansas forward, Blakely relays in a separate story. Some believe Jackson was bitter that the Celtics didn’t give him serious consideration when they had the No. 1 pick and he didn’t want to join the team after it traded back to No. 3.

“There was something that he didn’t want to play for the Celtics,” Ainge added.

As we explained in May when we published the rookie scale salary figures for 2017/18, the value of the contracts for this year’s first round picks depend on where they’re drafted. The NBA’s rookie scale for 2017/18 – which won’t change between now and next month, no matter where the salary cap lands – will determine what each player makes.

Each first round pick who signs an NBA contract this season will ink a four-year deal with two guaranteed seasons and team options on the third and fourth years. Players are eligible to sign for up to 120% of the rookie scale amount, or as little as 80% of that amount. However, virtually every rookie contract comes in at 120%. In fact, the new Collective Bargaining Agreement even alters the rules so that cap holds for first round picks count as 120% of the rookie amount now.

Listed below are this year’s top 30 picks, along with their projected rookie salaries, assuming they sign for 120% of their rookie scale amount. The total value of these contracts assumes that the third- and fourth-year team options will be exercised.

Additionally, we’ve listed the figures for players like Anzejs Pasecniks, even though he’s not expected to come to the NBA immediately. The rookie salaries for first round picks who are stashed overseas will look slightly different if they sign a year a two from now. 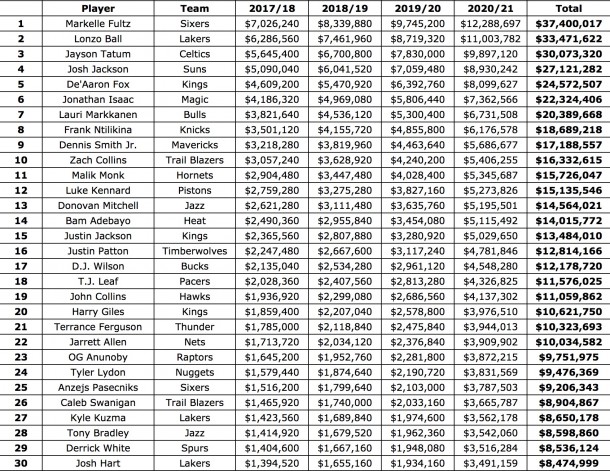 The 2017 NBA Draft is now in the books. The Sixers kicked off the night by nabbing Markelle Fultz with the No. 1 overall pick — as expected, with Lonzo Ball, Jayson Tatum, and Josh Jackson coming off the board after him.

The full results of this year’s draft are below, with trades noted, including a blockbuster that will send Jimmy Butler to Minnesota.

JUNE 23, 12:35am: The deal is official, with the Clippers sending cash considerations to the Bucks in exchange for Thornwell’s draft rights, per a press release.

JUNE 22, 11:03pm: Having already reached a deal for the No. 39 pick, the Clippers have picked up another second-rounder, according to Brad Turner of The Los Angeles Times. Turner reports (via Twitter) that Los Angeles has bought the No. 48 overall pick from the Bucks.

The Clippers are using the pick on South Carolina guard Sindarius Thornwell, per Shams Charania of The Vertical (Twitter link).

The exact details of the deal aren’t yet known, but it appears that the Clippers paid cash to obtain the pick from Milwaukee.

11:10pm: The deal is now official, according to the NBA. The Lakers used their picks on Josh Hart and Thomas Bryant.

9:33pm: The Jazz have agreed to acquire the No. 28 overall pick from the Lakers, according to Adrian Wojnarowski of The Vertical (via Twitter). Wojnarowski reports that Utah will use its newly-acquired pick to grab UNC’s Tony Bradley.

In exchange for giving up the No. 28 pick, the Lakers will move back two spots and pick up an extra selection. According to Wojnarowski (via Twitter), Utah is sending the 30th and 42nd overall picks to L.A. in the swap.

The Lakers already used two first-round picks, selecting Lonzo Ball at No. 2 and Kyle Kuzma at No. 27. Now, the team will have two more selections to use, as Magic Johnson and Rob Pelinka continue to stockpile assets.

11:07pm: The trade is now official, according to the Hornets, who used their newly-acquired pick on Dwayne Bacon (Twitter link).

9:58pm: The Hornets drafted Duke guard Frank Jackson at No. 31 and will trade him to the Pelicans, tweets Shams Charania of The Vertical.

Charlotte will receive pick No. 40 in return, along with cash. The selection they used to on Jackson was acquired from the Hawks in Tuesday’s Dwight Howard trade. The Hornets sent pick No. 41 to Atlanta in that deal, so they are essentially back where they started.

JULY 6, 12:13pm: The trade is official, according to a tweet from the Sixers.

JUNE 22, 10:56pm: The Bucks and Sixers have reached an agreement on the No. 46 overall pick, according to Shams Charania of The Vertical. Charania reports (via Twitter) that Milwaukee is acquiring the pick – and the draft rights to SMU’s Sterling Brown – from Philadelphia.

Brown is a 6’6″ senior who averaged 13.4 points and 6.5 rebounds for the Mustangs this season. He is the younger brother of former NBA player Shannon Brown.

In addition to top pick Markelle Fultz and Anzejs Pasecniks at No. 25, the Sixers came away from the draft with two second-rounders, Jonah Bolden at No. 36 and Mathias Lessort at No. 50.

JULY 6, 12:11pm: The trade is official, according to a tweet from the Sixers.

JUNE 22, 10:32pm: The Clippers have reached a deal for the No. 39 overall pick, according to Shams Charania of The Vertical. Charania reports (via Twitter) that Los Angeles will acquire the pick from the Sixers, gaining the draft rights to former Oklahoma State point guard Jawun Evans. The Sixers will receive cash in return, per David Aldridge of TNT (Twitter link).

Reports from earlier today had indicated that the Clippers were calling teams in the middle of the second round in an effort to get back into the draft. Los Angeles found a willing trade partner in the Sixers, who were loaded with second-rounders — Philadelphia entered the night with Nos. 36, 46, and 50 in addition to No. 39.

The Sixers aren’t eligible to receive more than $100K in cash in a trade this month, having already used most of their $3.5MM limit for the 2016/17 league year. As such, it seems likely that the two teams will wait until July to finalize the deal.