JULY 7: The Pacers have formally announced the signing of Collison.

“Having had Darren here in the past, we obviously knew what we were getting, both on the floor and in the locker room,” Pacers president Kevin Pritchard said in a statement. “When you bring in a player like Darren, you know you’re not only getting a point guard, you’re adding a veteran presence to your team.”

JULY 3: Point guard Darren Collison has agreed in principle on a two-year, $20MM contract with the Pacers, Adrian Wojnarowski of ESPN tweets. Collison averaged 13.2 PPG and 4.6 APG in 68 games, including 63 starts, with the Kings last season. 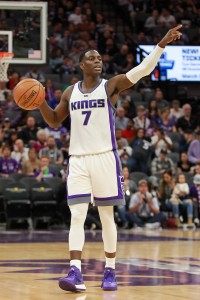 This is Collison’s second stint with Indiana. He was their starting point guard during the 2010/11 and 2011/12 seasons.

Indiana had a big hole to fill at that spot after Jeff Teague reached a three-year, $57MM agreement with the Timberwolves. They also have combo guards Monta Ellis and Victor Oladipo, who will be coming over from the Thunder in the Paul George deal.

The Knicks reached out to Collison but their interest was apparently lukewarm at best.

Collison served an eight-game suspension at the start of last season after a domestic battery incident. He has appeared in 563 career games, averaging 12.7 PPG and 4.8 APG while shooting 38% from long range.

The addition of Collison appears to be a stopgap move for a rebuilding Pacers club in the aftermath of trading their best player.