July 7, 7:47pm: The Heat have officially re-signed Johnson, the team announced over Twitter.

July 6, 10:00 PM: Johnson’s deal will be for four years and $60MM, Michael Scotto of Basketball Insiders reports (Twitter links). Scotto adds that the contract contains a player option in the fourth season. 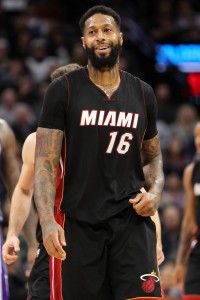 7:59 PM: The Heat and James Johnson have agreed on the framework of a four-year deal, Adrian Wojnarowski of ESPN.com reports (Twitter link). Johnson was widely expected to return to Miami.

Johnson floated around the league before signing a one-year deal with the Heat last offseason. He played a key role for Miami, earning 27.4 minutes per contest while serving as the team’s top perimeter defender.

The Heat struck out on bigger stars, such as Gordon Hayward, but rebounded by bringing in Kelly Olynyk and re-signing their own free agents.

The organization needs to clear cap space to accommodate lucrative deals for Olynyk, Johnson and Dion Waiters, and the team is working on moving Josh McRoberts to the Mavericks in order to do so.