JULY 18: The Jazz have officially signed Sefolosha, the team announced today in a press release. Based on Utah’s other roster moves, it appears the team completed the deal using cap room. 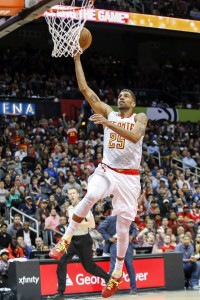 JULY 12: The Jazz have reached an agreement with free agent wing Thabo Sefolosha, according to Shams Charania of The Vertical, who reports that Sefolosha will sign a two-year, $10.5MM contract with Utah.

In Utah, Sefolosha will help to fill the gap left on the wing when Gordon Hayward departed for Boston. While he won’t come close to matching Hayward’s scoring, the former lottery pick should help stabilize the defense while players like Rodney Hood, Joe Johnson, and perhaps Alec Burks and Donovan Mitchell take on more of the scoring load.

We’ll have to wait to see how Utah handles its cap situation this year to know how the team is signing Sefolosha. The team’s new deal with Joe Ingles isn’t yet official, and it remains to be seen whether Boris Diaw‘s $7.5MM salary will be kept on the books. Depending on how the Jazz manage their cap, Sefolosha could either be signed using cap room or by using a portion of the club’s mid-level exception.