JULY 6, 12:05pm: The trade is official, according to a tweet from the Pacers.

JUNE 30, 8:42pm: Paul George will be traded to the Thunder, Ramona Shelburne of ESPN tweets. The scribe adds in a second tweet that Victor Oladipo and Domantas Sabonis will be headed to the Pacers. 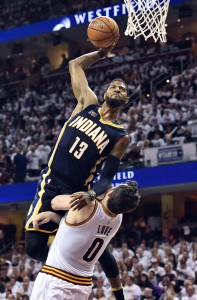 The deal was quickly confirmed by both TNT’s David Aldridge and Shams Charania of The Vertical and following up shortly thereafter was Royce Young of ESPN noting specifically that there will be no picks changing hands.

While George had been the subject of trade rumors ever since he expressed his desire to leave the Pacers next summer, the Thunder were not among the teams floated as a possible destination. It has since been made clear, however, that the Thunder have been in pursuit of George since at least the draft.

The move can be regarded as a risky one by general manager Sam Presti, who will see one of the game’s top two-way perimeter players suit up alongside the ever-prolific Russell Westbrook in 2017/18. George, however, has made no secret his desire to sign with his hometown Lakers next summer.

The relative lack of a return the Pacers received from Oklahoma City, specifically no draft picks, is indicative of how nervous league executives are about George ultimately leaving for Los Angeles in 2018, Brian Windhorst of ESPN says.

Teams on the outside looking in as the Thunder welcome the year’s most coveted “rental” include the Cavaliers, Celtics, Rockets and Wizards.

As the dust settles, the basketball community will pay special attention to how this impacts the future of the Thunder organization. Will the gesture of going out and landing Geoge be enough to convince Westbrook to sign a long-term extension this summer?

Of note is that the Thunder will not have the available cap space to negotiate a significant pay raise for George, meaning he’ll inevitably hit the free agent market in 2018. That doesn’t bode well considering his widely reported desire to play for the Lakers.

As far as the other side of the deal is concerned, the Pacers will bring a familiar face back to the state of Indiana. Prior to going second overall in the 2013 draft, Oladipo spent three years with the Hoosiers. Now, after a solid but unspectacular four years with the Magic and Thunder, the 25-year-old will have the opportunity to elevate his game with another change of scenery.

In Sabonis, the Pacers acquire a skilled big man fresh off of an acceptable first campaign. In limited action behind Steven Adams and Enes Kanter, Sabonis averaged 10.6 points and 6.4 rebounds per 36 minutes. He’ll slot in next to or just behind Myles Turner in Indiana.

The blockbuster deal is the second such move that will send an elite talent from the Eastern Conference westward. On draft day, Jimmy Butler of the Bulls was moved to the Timberwolves.