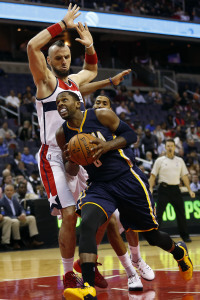 The Pacers and Raptors have agreed to a sign-and-trade deal that will send free agent C.J. Miles to Toronto, tweets Adrian Wojnarowski of ESPN.com. Miles will sign a three-year deal with the Raptors worth about $25MM that contains a player option for the final season.

The trade cannot be completed until Toronto moves some salary by sending DeMarre Carroll to Brooklyn, Wojnarowski notes (Twitter link). That deal is contingent on the Wizards matching the Nets’ offer sheet to Otto Porter, which they have announced they will do. However, provisions for Porter’s physical could delay the matching process to as late as Wednesday.

Joseph, who turns 26 next month, played in 80 games for the Raptors last season, averaging 9.3 points and 3.3 assists, mostly as a combo guard off the bench. He will make $7.66MM next season and has a player option worth $8MM for 2018/19. He’ll team with newly-signed Darren Collison as Indiana looks to replace Jeff Teague at the point guard position.

Miles, a 30-year-old swingman, will serve as a replacement for Carroll and provide Toronto with some additional outside shooting. A 12-year veteran, Miles is coming off another productive season — in 76 games, he averaged 10.7 points and 3.0 rebounds, and shot a career-best 41.3% on three-pointers. He will be getting a raise from the $4.58MM he made last season.

The Raptors will be hard-capped at $125.266MM for the 2017/18 league year as a result of acquiring a player in a sign-and-trade deal, and may also have to rely on a pair of youngsters – Delon Wright and Fred VanVleet – as the backup point guards behind Kyle Lowry.

22 thoughts on “C.J. Miles Headed To Toronto In Sign-And-Trade”