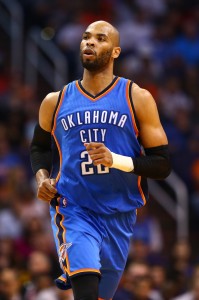 JULY 2: The Timberwolves have agreed to sign free agent power forward Taj Gibson, reports Shams Charania of The Vertical (via Twitter). According to Charania, Gibson will receive $28MM on a two-year deal from Minnesota.

The pact doesn’t include an option (player or team) for the second year, per Sam Amick of USA Today (on Twitter). News of the agreement comes on the heels of a report from Darren Wolfson of 5 Eyewitness News (Twitter link) that the Wolves’ interest in Gibson had “increased.”

By agreeing to join the Wolves, Gibson will reunite with Tom Thibodeau, who coached the forward in Chicago. He’ll also be joining former Bulls teammate Jimmy Butler, who was acquired by Minnesota in a blockbuster trade. The market for Gibson’s services was relatively quiet, with the only other team reportedly interested in him being the Kings.

Inking Gibson will wipe out most, if not all, of Minnesota’s remaining cap room. The Wolves are still armed with their Room Exception, valued at about $4.33MM, which can be used to further bolster their ever-improving roster. However, adding Gibson almost certainly eliminates the Wolves from the Paul Millsap sweepstakes, which may make the Nuggets the frontrunner to land the versatile forward.

The Timberwolves will likely have to renounce their qualifying offer for Shabazz Muhammad in order to sign Gibson, which would make the swingman an unrestricted free agent. Muhammad could – in theory – still return to Minnesota, but the Wolves would no longer have matching rights, allowing him to sign outright with another club.