1:29pm: The Knicks and Hornets have both confirmed the trade, issuing press releases to announce the deal. 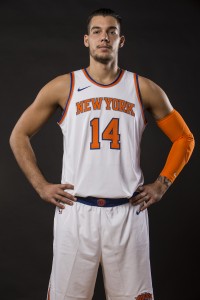 “We’re excited to add a player of Willy’s caliber to our team,” Hornets GM Rich Cho said in a statement. “He showed last season that he can contribute when given the opportunity and we believe that the added depth he provides will benefit our frontcourt rotation.”

In his own statement, Knicks GM Scott Perry said the deal gives the Knicks “valuable” draft picks and better positions the club as it builds for the future.

10:22am: The Knicks are in the process of finalizing a trade with the Hornets that will send center Willy Hernangomez to Charlotte, reports Shams Charania of Yahoo Sports. According to Charania, the Knicks will receive Johnny O’Bryant and a pair of second-round picks in the deal.

Those second-rounders headed to New York will be Charlotte’s own picks in 2020 and 2021, tweets Charania. Michael Scotto of The Athletic adds (via Twitter) that they’ll be unprotected.

A second-round pick himself in 2015, Hernangomez signed his first NBA contract with the Knicks in the summer of 2016 and played 72 games (22 starts) during the 2016/17 campaign. He averaged a respectable 8.2 PPG and 7.0 RPG for New York in just 18.4 minutes per contest in his rookie year, and appeared to be one of the promising young building blocks for the franchise.

This season, however, the arrival of Enes Kanter and the strong play of Kyle O’Quinn have resulted in a significantly reduced role for Hernangomez, who has averaged just 9.0 MPG in 26 contests. Even with Joakim Noah not really in the mix at center for the Knicks this season, there has been little room in the rotation for Hernangomez, prompting the young big man to repeatedly express a desire to play more. We heard earlier this week that the 23-year-old’s reps had requested a trade.

For the Knicks, the move comes on the heels of Kristaps Porzingis‘ season-ending ACL injury. Entering the season, the team had identified Porzingis and Hernangomez as two core pieces for its rebuild, along with Frank Ntilikina and Tim Hardaway Jr. Now, in the span of two days, Porzingis has potentially been lost until the 2019 calendar year, while Hernangomez is headed to Charlotte.

As for the Hornets, they’ll pick up an intriguing prospect who still has two more years left on his contract after the 2017/18 season. That contract is extremely team-friendly, with Hernangomez set to earn $1.54MM in 2018/19 and $1.68MM in 2019/20. Those modest salaries are especially appealing for the Hornets, whose cap sheet is currently overloaded with eight-figure salaries.

While Hernangomez is a nice pickup for the Hornets, the team runs the risk of creating the same sort of frontcourt logjam that plagued the Knicks. Dwight Howard is the starting center in Charlotte, with Cody Zeller and Frank Kaminsky also earning minutes at the five. It will be interesting to see if the Hornets plan to hang onto all those players through Thursday’s trade deadline.

Since they can take on O’Bryant’s salary using the minimum salary exception, the Knicks will create a very minor trade exception in the swap — it’ll be worth $1,435,750, the amount of Hernangomez’s salary for 2017/18.

Meanwhile, the two draft picks acquired by New York in the deal will essentially replace the Knicks’ own 2020 and 2021 second-rounders, which the team traded to Philadelphia back on draft day in 2015. The Knicks’ return in that trade with the Sixers was the No. 35 overall pick in the 2015 draft — the selection used to nab Hernangomez.