JULY 6: The Lakers have officially re-signed Caldwell-Pope, the team announced today in a press release.

JULY 1: The Lakers will re-sign Kentavious Caldwell-Pope, Chris Haynes of ESPN reports. The news comes less than an hour after it was revealed that they’ll be inking LeBron James as well. James and Caldwell-Pope are both represented by agent Rich Paul and the Klutch Sports Group. 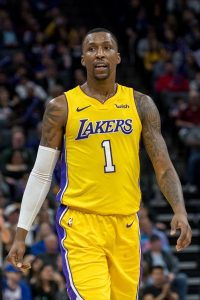 In a subsequent tweet, Haynes added that the deal for Caldwell-Pope will be a one-year pact worth $12MM. That’s $6MM less than the one-year contract the two parties agreed on last summer.

Caldwell-Pope, who complements his ability to make three-pointers with strong perimeter defense on the other end of the floor, will return to Los Angeles after apparently seeing interest from a number of teams, including the Grizzlies and Clippers.

Adding Caldwell-Pope’s new $12MM deal to James’ max contract significantly reduces the Lakers’ available cap room. With Luol Deng‘s $18MM salary and Julius Randle‘s $12MM+ cap hold on their books, the Lakers are essentially capped out after committing $47MM+ to LeBron and KCP. However, the team could re-open space by renouncing Randle and trading or stretching Deng.