JULY 24: The Nets have officially re-signed Harris, going over the cap using his Early Bird rights to sign him. 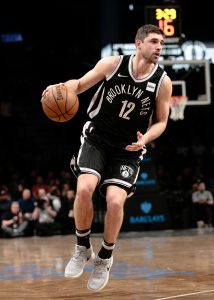 JUNE 30: The Nets have reached an agreement with free agent sharpshooter Joe Harris, according to ESPN’s Adrian Wojnarowski, who reports (via Twitter) that Harris will re-sign with Brooklyn on a two-year, $16MM deal.

It will be a straight two-year contract with no options on either side, adds Michael Scotto of The Athletic (Twitter link).

The Nets will retain Harris’ $1.5MM cap hold, use all their available space and then use his Early Bird rights to go over the cap and finalize the signing, according to salary cap expert Albert Nahmad (Twitter link). They can still produce up to $8.1MM in cap space, plus whatever they might save in a buyout of Dwight Howard.

Harris, 26, struggled to find a spot in the NBA before coming to Brooklyn two seasons ago. He emerged as a valuable reserve for the Nets, averaging 8.2 points per game in 2016/17 and improving that to 10.8 this season while hitting 42% from 3-point range.

The new deal represents a significant salary jump for Harris, who earned $1.5MM this year.