JULY 13: The trade is now official, according to a pair of press releases issued by the Nets and Hawks. Atlanta receives Lin, Brooklyn’s 2025 second-round pick, and the right to swap 2023 second-rounders with the Nets in exchange for Cordinier and a heavily-protected 2020 second-rounder, as detailed below. 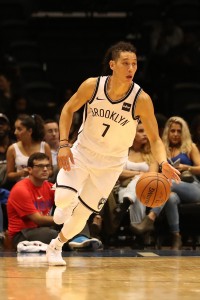 [RELATED: Cap implications of the trade for Nets, Hawks]

JULY 12: The Nets have agreed to a trade that will send Jeremy Lin to the Hawks, reports ESPN’s Adrian Wojnarowski. The deal will allow Brooklyn to clear the cap space necessary to take on a pair of expiring contracts from the Nuggets in another deal.

According to Wojnarowski, the Nets will receive Portland 2020’s second-round pick (top-55 protected) and the rights to 2016 draft-and-stash second-rounder Isaia Cordinier in the trade.

In addition to Lin, the Hawks will acquire a 2025 second-round pick and the right to swap picks with the Nets in 2023, Woj adds. His report doesn’t mention anything about first-round picks, so we’ll assume for now that the ’23 pick swap applies to second-rounders.

For the Hawks, adding Lin will mean further bolstering a point guard depth chart that already features leading scorer Dennis Schroder and fifth overall pick Trae Young. Schroder has been frequently cited as a potential trade candidate and Young’s performance in Summer League action has been up and down, so Lin could provide some added stability at the position. His presence also could expedite a Schroder trade, as Wojnarowski reports.

Of course, it may be premature to pencil in Lin for 25-30 minutes per game for the upcoming season, since he’s coming off a major knee injury. The veteran point guard admitted recently that he has yet to play 5-on-5 ball, but fully expects to be ready for training camp. The Hawks plan to keep him, tweets David Aldridge of TNT.

As we detailed earlier today, the Hawks had upwards of $18MM in cap room available, with the flexibility to increase that number to nearly $24MM by renouncing free agents and waiving non-guaranteed players. No additional moves will be required in order to absorb Lin’s $12.5MM expiring contract using their current cap space.

General manager Travis Schlenk had said that the Hawks didn’t expect to pursue major free agents, noting that the team’s “free agency is going to be trades.” The acquisition of Lin reflects that plan, though it’s still a somewhat surprising move. Given where the Hawks are in their rebuilding process, it would have made more sense to me if Atlanta had used its cap room to take on the Nuggets’ unwanted contracts and acquired a pair of picks in the process.

That’s exactly what the Nets will do with their newly-created cap room after moving Lin. As we detail in a separate story, shedding Lin’s salary will allow Brooklyn to take on Kenneth Faried and Darrell Arthur from Denver. The Nets will receive a first-round pick and a second-round pick from the Nuggets for their troubles.

Meanwhile, the Nets should still have plenty of depth in their backcourt heading into the 2018/19 season, with Spencer Dinwiddie and D’Angelo Russell capable of handling point guard duties.