JULY 6th, 10:00pm: The signing is official, according to a team press release.

JULY 2nd, 1:55pm: Free agent center Nerlens Noel has reached an agreement to sign with the Thunder, league sources tell Shams Charania of Yahoo Sports. According to Charania, Noel will sign a two-year contract that includes a second-year player option. It’s a minimum deal, per Brett Dawson of The Oklahoman (Twitter link). 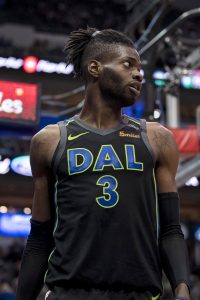 However, with Joel Embiid, Jahlil Okafor, and Richaun Holmes in the mix at center for the 76ers in 2016/17 and Noel once again battling knee issues, he struggled to carve out a regular role and was eventually sent to Dallas at the trade deadline.

As a restricted free agent during the 2017 offseason, Noel reportedly passed on a four-year, $70MM offer from the Mavericks and ultimately signed his one-year qualifying offer, putting him on track for unrestricted free agency this summer. Once again limited by injuries, Noel appeared in just 30 games during his contract year in 2017/18, averaging 4.4 PPG and 5.6 RPG in 15.7 minutes per contest.

Noel will get an opportunity to rebuild his value in Oklahoma City, where he’ll presumably slot in as the team’s backup center behind Steven Adams. According to Charania, the Thunder “aggressively” pursued Noel in free agency, with head coach Billy Donovan meeting him on July 1. Russell Westbrook and Paul George pitched the young center on joining the club, Charania adds.

The Thunder’s agreement with Noel is the latest move in an eventful offseason for the franchise, which has already struck lucrative new deals with George and Jerami Grant.

The Thunder currently project to be way over the tax line, with team salary set to $160MM+, so cost-cutting moves are expected at some point along the way. Carmelo Anthony – who has an expiring contract worth $27.93MM – represents the most obvious candidate to be stretched, since the cap and tax savings created by reducing his cap hit to $9.31MM would be massive.