SEPTEMBER 4, 12:42pm: Wallace’s two-year offer sheet with the Pelicans will feature a $300K partial guarantee as of September 12, according to Shams Charania of The Athletic (Twitter link). 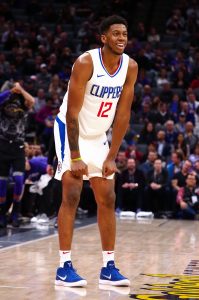 SEPTEMBER 3, 11:26am: The Pelicans have reached an agreement with restricted free agent guard Tyrone Wallace, according to Shams Charania of The Athletic, who reports (via Twitter) that Wallace will sign an offer sheet with New Orleans.

Wallace finished the 2017/18 season on a two-way contract with the Clippers, who extended a qualifying offer to the rookie guard. The 24-year-old isn’t a traditional restricted NBA free agent like Rodney Hood or Patrick McCaw, but he’s a two-way RFA, which essentially gives the Clips the same rights — they’d have the opportunity to match the Pelicans’ offer sheet.

A former second-round pick out of the University of California, Wallace made his NBA debut for the Clippers last season after signing a two-way deal with the club, and became a crucial part of L.A.’s rotation. In total, Wallace appeared in 30 games (19 starts), averaging 9.7 PPG, 3.5 RPG, and 2.4 APG in 28.4 minutes per contest.

Wallace was one of a handful of point guards to work out for the Pelicans in August as the club sought depth at the position. Ty Lawson, Darius Morris, and Erick Green were among the other free agents who earned a look from New Orleans, but the team apparently liked what it saw from Wallace. If the Pelicans add Wallace or another point guard to their regular season roster to join Elfrid Payton and Frank Jackson, it would allow Jrue Holiday to see more action off the ball.

Assuming Wallace officially signs his agreed-upon offer sheet with the Pelicans, the Clippers would have two days to decide whether or not to match it. The Clips already have an overcrowded backcourt and a full roster, so they may simply let Wallace go. Still, the Pelicans’ cap flexibility is limited and their offer will have to be for the minimum salary, so it’s not out of the question that L.A. would match the offer and figure out its roster logjam later.

The Clippers currently have 15 players on guaranteed salaries, plus Patrick Beverley‘s non-guaranteed contract.