The Bulls have fired head coach Fred Hoiberg, the team announced today in a press release. Associate head coach Jim Boylen will assume head coaching duties in Chicago, according to the club. 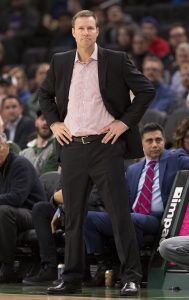 “Decisions like this one are never easy to make, however I felt this was the right choice for our organization at this time,” executive VP of basketball operations John Paxson said in a statement. “After a thorough evaluation, I elected to make this move with the overall development of our team in mind. As a team, I believe it is imperative that we make unfaltering strides in the right direction and build the right habits to help put our players in the best position to evolve not only now, but into the future.”

Hoiberg, who coached at Iowa State before joining the Bulls, was hired by Chicago during the 2015 offseason, which made him the league’s 12th-longest-tenured head coach up until today. He was in the fourth year of a five-year, $25MM contract, so the Bulls will be on the hook for the remaining money on his deal.

A report over the weekend had suggested that Hoiberg’s job may be in jeopardy, though it sounded like the Bulls would take a longer look at his performance now that some of the club’s injured players have started getting back on the court — Lauri Markkanen made his season debut over the weekend, while Kris Dunn and Bobby Portis are close to returning. A source tells Joe Cowley of The Chicago Sun-Times that Hoiberg was “caught off guard” by his dismissal, believing he’d have the opportunity to coach a fully healthy team.

Instead, Paxson and the rest of the club’s management and ownership groups acted decisively, making Hoiberg the second head coach to be dismissed since the start of the 2018/19 regular season — former Cavaliers coach Tyronn Lue was the first.

Given his previous success at the NCAA level, Hoiberg looks like a strong candidate to return to the college ranks if no favorable NBA opportunities emerge right away. However, for now, his preference is to continue coaching at the NBA level, reports K.C. Johnson of The Chicago Tribune (Twitter link).

Meanwhile, ESPN’s Adrian Wojnarowski confirms (via Twitter) that Boylen – not to be confused with former Bulls coach Jim Boylan – has been named the permanent coach, with no interim title. According to Johnson (Twitter link), Boylen is well regarded within the organization and has a chance to keep the job for the long term. The veteran assistant had stints with the Spurs, Pacers, Bucks, Warriors, Rockets, and multiple colleges before joining the Bulls in 2015.

As Wojnarowski notes (via Twitter), Boylen remains under contract through the 2019/20 season at just under $1MM annually. It’s not immediately clear whether the Bulls will ask him to coach under that deal or negotiate a longer-term extension, but either way, they’ll give him every chance to succeed, per Woj (Twitter link).