Marvin Bagley III left the court on Wednesday night with an injury to his left knee, which is the same one that kept him sidelined for roughly a month earlier this season. The 2018 No. 2 overall pick was showing promising signs coming out of the All-Star break, scoring 20.3 points per game while adding 10.5 rebounds, 1.0 steals, and 1.3 blocks per contest over that stretch.

With Bagley set to miss at least a week or two, the Kings will be forced to reshuffle their rotation and the biggest winner could be Harry Giles. 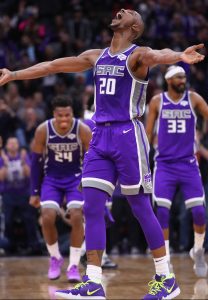 Giles saw 18 minutes on Wednesday versus the Bucks, accumulating 18 points, seven rebounds and one block while making 9-of-13 looks from the field. He played many of his minutes at the four spot when Bagley was sidelined this winter and on Friday, Sacramento will take on the Clippers—a team that has been the fourth-most fantasy-friendly to opposing power forwards this season.

While Giles should be a profitable low-cost option in daily fantasy this weekend, I wouldn’t necessarily add the second-year big man in season-long leagues until we see exactly what coach Dave Joerger is going to do with the rotation. If you have the roster space, he makes for a nice speculative add, as has the potential to be a fantasy playoff difference-maker if he gets enough run.