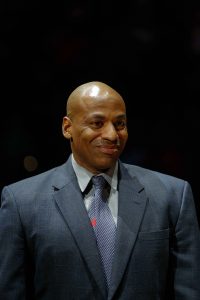 According to Wojnarowski, the Pelicans intend to be “aggressive” in the marketplace in hiring a high-level basketball executive to replace Demps. For now, they’re considering internal candidates such as special advisor Danny Ferry and director of player personnel David Booth to fill the GM role on an interim basis.

While it’s possible that Ferry and/or Booth could be in the mix for the permanent job in New Orleans, owner Gayle Benson is telling associates that she wants an overhaul of the organization, according to Wojnarowski, who reports that ownership was “livid” about Davis leaving the arena early on Thursday night. After suffering a shoulder injury in the second quarter of Thursday’s game, an impressive win over the Thunder, Davis left with agent Rich Paul to get an MRI before the game was over.

Demps, a former NBA player, had been the general manager in New Orleans since July of 2010, taking over the role back when the team was still known as the Hornets. Despite landing the No. 1 overall pick and selecting Davis in the 2012 draft, the franchise has earned just three playoff berths during Demps’ tenure, including two since drafting Davis. The club earned its lone playoff series win last spring, a first-round sweep of the Trail Blazers.

The Pelicans entered the 2018/19 season hoping to build on that first-round victory, but have been outside the playoff picture since the fall. Things went from bad to worse in January, when Paul publicly requested a trade on behalf of Davis.

Demps and the front office elected not to move AD before the deadline despite some aggressive offers from the Lakers, and had hoped to re-open trade discussions with multiple teams, including the Celtics, in the offseason. However, it appears as if a new executive will be tasked with maximizing the return on Davis this summer.

According to Wojnarowski, ownership’s plan with its new GM will be to continue pushing back on Davis’ preferred destinations if they don’t make sense for the Pelicans. The All-NBA big man is said to prefer a move to the Lakers, Knicks, Clippers, or Bucks.

Meanwhile, sources tell Wojnarowski that ownership and senior management has been pleased with head coach Alvin Gentry, who has been responsible for keeping his players focused during a tumultuous stretch for the franchise. Still, while Gentry is in good standing with ownership, a new general manager will likely to get to make a decision on the club’s long-term head coach, tweets Scott Kushner of The Advocate.

The Pelicans’ current front office structure is one of the more unusual ones in the NBA, as Mickey Loomis is technically the team’s president, ranking above Demps on the basketball operations hierarchy. However, Loomis – who was installed by late owner Tom Benson, Gayle’s husband – is primarily a football executive, serving in a similar role for the New Orleans Saints.

Loomis has mostly stayed out of the Pelicans’ basketball decisions, letting Demps and his staff make those calls. It will be interesting to see if the team modifies its management hierarchy at all during this period of upheaval.