Why J.R. Smith May (Or May Not) Be A Valuable Offseason Trade Chip

Even though J.R. Smith hasn’t played for the Cavaliers or been with the team since November, he still technically remains under contract with Cleveland. The Cavs explored possible trades before the deadline but couldn’t find anything to their liking. Rather than buying out Smith’s contract after the deadline though, the Cavs held onto him, indicating that they’d try again to move him in the offseason.

There are some good reasons for the Cavaliers to believe they can move Smith this summer, despite the fact that he didn’t look good to start the season and hasn’t appeared in a game in nearly four months. However, there are also a couple reasons why a deal might not be viable that have nothing to do with Smith’s on-court performance.

Let’s take a closer look at the situation… 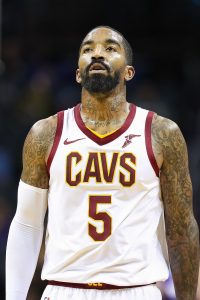 Smith is a 33-year-old outside shooter who wasn’t shooting particularly well this season (.308 3PT%). He’s also earning $14.72MM. Why would he have positive trade value?

Ironically, the contract that made Smith difficult to move at this year’s trade deadline is the thing that could clear a path to an offseason deal. Once this season ends, a team with interest in trading for Smith wouldn’t have to worry about paying his $14.72MM salary for 2018/19. That club would only have to consider his $15.68MM salary for 2019/20.

How is that better?

That ’19/20 salary is only partially guaranteed for $3.87MM, meaning whichever team ends up with Smith wouldn’t be on the hook for the entire thing. If he’s waived by the end of June, a team could either leave the $3.87MM charge on its cap for 2019/20 or stretch it, spreading it across three years at a rate of $1.29MM annually.

What would be the point of trading for Smith just to waive him?

For teams that don’t necessarily project to have as much cap flexibility as they’d like this offseason, acquiring Smith in exchange for a player with a sizable guaranteed 2019/20 salary represents a fast track to creating that flexibility.

For instance, let’s say that the Hornets, in an effort to re-sign Kemba Walker and get him some help, want to try to create some cap space this summer. Trading, say, Bismack Biyombo ($17MM player option for ’19/20) in exchange for Smith and then stretching J.R. would allow the team to trim $15.71MM from its books for next season.

There are plenty of other candidates besides Charlotte for such a deal. Maybe the Wizards want to dump Ian Mahinmi‘s contract ($15.5MM in ’19/20) a year early. Perhaps the Trail Blazers want to move Evan Turner ($18.6MM) or Meyers Leonard ($11.3MM).

In order to entice the Cavaliers to take on some guaranteed money, a trade partner would have to include at least one asset such as a young player or a first-round pick. The Cavs have already made a couple of these trades this season, acquiring first-rounders from the Bucks and Rockets when they took on John Henson, Matthew Dellavedova, and Brandon Knight.

Okay, but why are we focusing on just Smith? Aren’t there other players around the league with similar contracts?

To some extent, yes. George Hill, for example, has an $18MM cap hit for next season, but only $1MM of his salary is guaranteed. Avery Bradley has a $2MM guarantee on his $12.96MM salary.

The detail that differentiates Smith’s contract is the date it was signed. Hill’s and Bradley’s contracts were inked under the league’s current Collective Bargaining Agreement, which went into effect in 2017. Smith signed his deal a year earlier, in 2016, under the old CBA.

The current CBA changed the rules regarding how partially guaranteed contracts are handled in trades, as we outlined in more detail here. In short, if the Bucks wanted to trade Hill this offseason, his contract would only count for $1MM for salary-matching purposes under the new rules — not $18MM. Bradley would count for just $2MM for salary-matching purposes. That essentially eliminates the ability for a team to create cap room by trading a guaranteed contract for a non-guaranteed one.

But the old rules still apply to Smith’s contract, signed under the old CBA, which means it counts for the full $14.72MM for salary-matching purposes. And that means that the Cavs could take back up to $19.72MM in returning salary in exchange for Smith in June.

Smith is currently the only NBA player who has a contract that fits this bill, and the rebuilding Cavs are in prime position to capitalize on it, since they don’t expect to contend next season and don’t mind taking on some bad money if it nets them another long-term asset.

So we should expect the Cavs to trade Smith’s contract in June for a player with a guaranteed 2019/20 salary?

Maybe. In a vacuum, that certainly looks like the right play. But those trades we mentioned previously for Henson, Dellavedova, and Knight have complicated matters for the Cavaliers.

With those contracts, plus lucrative salaries for Kevin Love, Tristan Thompson, Jordan Clarkson, and Larry Nance, on their books, the Cavs already have about $119.3MM in guaranteed money committed to 10 players, not counting Smith. The NBA’s latest cap projections estimate a luxury tax threshold of $132MM. So if the Cavs were to acquire a player earning more than $13MM or so in exchange for Smith, they’d cross that tax line with at least three more roster spots to fill.

That’s a problem. Owner Dan Gilbert showed during LeBron James‘ years in Cleveland that he’s willing to spend big money on the club, but it’s hard to imagine him going back into the tax for this team. Especially since the Cavs would still be subject to more punitive repeater penalties next year.

Couldn’t the Cavs waive or trade someone to get below the tax line?

In theory, yes. Many of the Cavs’ priciest players would be on expiring contracts, so the team could waive and stretch one or two of them to avoid the tax. But that’s not a particularly desirable outcome either.

If Cleveland were to stretch Knight’s $15.64MM salary, for example, the team would incur $5.21MM cap hits for him in 2020/21 and 2021/22. Those are years when the Cavs project to have cap flexibility, so they’ll want to avoid those sorts of dead-money charges if they can.

A trade to get out of the tax would be the preferred solution, but most of the Cavs’ high-priced veterans don’t have positive trade value. The team would probably have to attach an asset to move one of them, which would sort of defeat the purpose of a Smith trade in the first place.

Is the tax issue the only potential roadblock?

Well, besides those tax-related questions and the usual challenge of getting two NBA teams to agree on the assets involved in a given deal, there’s also the issue of timing. Smith’s contract will become guaranteed if he’s still under contract when the new league year begins on July 1, so he must be released by June 30 to take advantage of the structure of his deal.

That gives the Cavs plenty of time before, during, and after the June draft to find a trade, but it will likely close a few doors. After all, the primary motivating factor for any team with interest in Smith would be to shed salary. And the main reason to shed salary would be to create cap room for a separate acquisition, likely a free agent. Free agency doesn’t technically begin until July 1.

In order for a team to be comfortable acquiring and waiving Smith in June, that team might have to be pretty confident that a certain free agent will sign in July. Because acquiring Smith would mean surrendering an asset, no team would make such a move without a clear plan in mind.

Okay, so there are pros and cons. Do you think the Cavs will actually find a taker for Smith, or will they just end up waiving him themselves before June 30?

If I had to place a bet today, I’d say Smith gets dealt. We’ve heard so much talk in recent months about the same few teams – the Lakers, Knicks, Clippers, Nets, and a couple others – as potential destinations for star free agents, but I could easily envision a surprise team stepping up and using a Smith trade to help create the max room necessary to make a run at a top-tier player.

In that scenario, I believe the Cavs would bite the bullet and stretch one of their expiring contracts to avoid the tax — they wouldn’t have to do it right away, so they could even wait until the 2020 trade deadline to see if one of those expiring veterans increases his value and perhaps allows them to duck the tax via a trade.

Still, since we’ll likely hear plenty of Smith-related trade chatter through the end of June, it’s worth keeping those potential roadblocks in mind. Moving his contract won’t necessarily be as simple as it might appear.

Photo courtesy of USA Today Sports Images. Contract information from Basketball Insiders was used in the creation of this post.

8 thoughts on “Why J.R. Smith May (Or May Not) Be A Valuable Offseason Trade Chip”