Every week, Hoops Rumors takes a closer look at players who will be free agents or could become free agents next offseason. We examine if their stock is rising or falling due to performance and other factors. With the playoffs in full swing, we turn our attention to the Eastern Conference:

Marcus Morris, Celtics, 29, SF/PF (Up) – Signed to a four-year, $20MM deal in 2015
Unlike his brother Markieff, who played sparingly for the Thunder during their annual first-round flame-out, Marcus remains a valued member of Boston’s rotation. Other than a goose egg in Game 2 against Indiana, Morris has delivered steady production. He’s shooting 49.1% overall and 40.7% from distance while ranking second on the team in rebounds (6.7). He posted a +11.1 net rating on NBA.com’s postseason advanced stats entering Game 3 against Milwaukee. He had 16 points, eight rebounds and two blocks on Friday. Morris’ toughness and ability to play both forward positions will make him attractive in the free agent market. 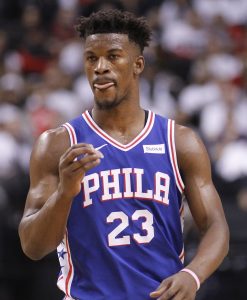 Jimmy Butler, Sixers, 29, SF (Up) — Signed to a five-year, $92.3MM deal in 2017
Butler hurt his reputation by whining his way out of Minnesota. After forcing the Timberwolves’ hand, he got a chance to chase at least a conference title in Philadelphia. Following some ho-hum performances against Brooklyn, Butler has performed like a max-level player against Toronto the last two games. He’s averaged 26.0 PPG, 9.5 RPG, 7.0 APG and 2.0 SPG in those victories. You can put up with his abrasive style when he produces like that. He remains firmly entrenched as the third-best free agent wing — and perhaps overall player — behind Kevin Durant and Kawhi Leonard.

Sterling Brown, Bucks, 24, SG (Up) – Signed to a three-year, $3.8MM deal in 2017
Brown’s contract for next season becomes guaranteed if he’s still on the roster at the beginning of July, when free agency begins. That in itself seems to be a near guarantee. With Malcolm Brogdon sidelined, Brown has received rotation minutes for much of the postseason. His most noteworthy performance came in the series clincher against Detroit when posted nine points, 13 rebounds and six assists. Brown also plays with a little bit of an edge and can get under opponents’ skin. Brown sat in Game 3 of the series with Boston but he’s already done enough to stay on the roster, especially with Brogdon a restricted free agent and Khris Middleton unrestricted.

Danny Green, Raptors, 31, SG (Down) – Signed to a four-year, $40MM deal in 2015
Green’s contributions to the scoring column are predicated on knocking down threes. A whopping 69% of his field-goal attempts during the regular season came from beyond the arc and he made a career-high 45.5%. It’s been a lot rougher in the postseason. He shot 31.8% from deep in the Orlando series and has made 30.6% in the first three games against Philadelphia. Green should still find a starting job this summer, whether he re-signs with Toronto or a team seeking veteran help. But his lack of versatility will limit the size of those offers.