MAY 13, 7:47pm: The Lakers have officially signed Vogel to a multiyear contract, according to a team press release. 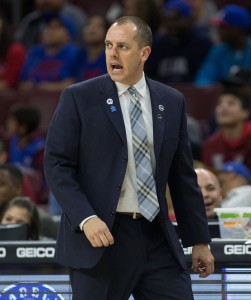 “We are excited to add Frank Vogel as the next head coach of the Lakers,” Pelinka said in a statement. “Coach Vogel has a proven track record of success in the NBA Playoffs, and he reflects the core qualities we were looking for in a head coach – including, detailed game preparation, extreme hard work, and holding players accountable to the highest basketball standards.”

MAY 11, 6:13pm: Vogel has accepted a three-year deal to be the Lakers’ next coach, Wojnarowski tweets. Kidd has agreed to join his staff in a “prominent assistant coaching role” (Twitter link).

Vogel probably won’t have a top assistant, with the entire staff being considered equal, Woj adds. A team source called it “the Phil Jackson model,” another indication that Jackson and Rambis had a hand in Vogel’s hiring.

4:14pm: Frank Vogel has become “a front-runner” in the Lakers’ coaching search after interviewing with the team on Thursday, according to Adrian Wojnarowski and Ohm Youngmisuk of ESPN. Sources say the team plans to hire Jason Kidd as an assistant to work with Vogel.

GM Rob Pelinka has been talking to people who have experience with Vogel and Kidd to determine if they can comfortably fit together on the same staff, the authors add. The Lakers admire how Kidd developed young talent in Milwaukee and view him as a mentor for Lonzo Ball.

Vogel, 45, was previously a head coach with the Magic and Pacers, compiling a 304-291 record with five playoff appearances. He has been out of coaching since being fired in Orlando at the end of last season.

Vogel’s interview included “detailed discussions” on how he would handle a volatile situation in Los Angeles. The Lakers underachieved in LeBron James‘ first year in L.A., then saw team president Magic Johnson resign on the final day of the season, followed by a chaotic coaching search with assumed favorite Tyronn Lue turning down an offer this week.

The move toward Vogel underscores the influence of adviser Kurt Rambis and former coach Phil Jackson, according to Wojnarowski and Youngmisuk, who note that Vogel was the second choice when Jackson hired Jeff Hornacek to coach the Knicks three years ago.

Mike Woodson and Lionel Hollins were also rumored to be in the running for the Lakers’ job after negotiations with Lue ended. Their status is unclear in light of the latest news on Vogel.