James Ennis On Potential Return To Sixers: “I Would Love To Come Back”

Swingman James Ennis hopes to re-sign with the Sixers on a new, long-term deal in free agency, one that could give him some newfound stability in what’s been a roller coaster career to date, the 28-year-old told Hoops Rumors. 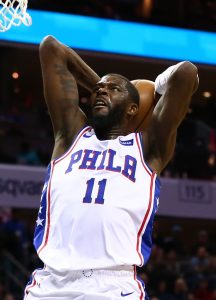 Ennis, who was a key cog off the 76ers’ bench during the playoffs, got traded to Philadelphia halfway through the season after starting the campaign in Houston. He worked his way up the ladder and gained more playing time, quickly earning the trust of head coach Brett Brown.

Ennis — along with agent Scott Nichols of Rize Management — informed the Sixers of his decision to decline a $1.85MM player option for the 2019/20 season last month. He’ll become an unrestricted free agent once free agency opens on June 30 at 6:00pm eastern time.

“I love the [Sixers] fans,” Ennis told Hoops Rumors. “I love how they support the team. I like Philly a lot and I would love to come back.”

Ennis, who held per-game averages of 7.5 points, 3.8 rebounds and 21.1 minutes in the playoffs, is expected to seek a more lucrative multiyear deal and will receive interest from multiple teams.

The Sixers’ ability to retain Ennis could hinge in part on what Jimmy Butler, Tobias Harris and J.J. Redick choose to do in free agency. Philadelphia will only hold Ennis’ Non-Bird rights, limiting the club’s ability to offer much of a raise, so cap room or another exception will likely be required to bring him back. Another franchise in need of a serviceable bench option could steal him away if the right contract is offered.

Ennis has made stops with a handful of teams in his five-season NBA career, spending time with Miami, Memphis (twice), New Orleans, Detroit, Houston and Philadelphia. During that time, he has worked hard to establish himself as a two-way player, which is a major reason why he’s expected to seek a multiyear deal on the open market.

For Ennis, a journeyman now set to bet on himself in unrestricted free agency, declining his player option didn’t signify a desire to leave the 76ers. He has already held discussions with Brown about how he can improve his game entering next season, labeling defense and three-point shooting as two major areas to work on this offseason.

“I’m always gonna try to get better defensively, lateral movements and stuff like that,” Ennis said. “But just being a consistent knock-down three-point shooter [is the goal]. I think I shoot the ball okay, but I’ll be an elite shooter next year. Definitely.”

Sixers general manager Elton Brand will certainly have his hands full in free agency with the decisions of Butler, Harris, Redick and others this summer. But Ennis’ situation shouldn’t be ignored, especially given the club’s depth issues down the stretch.

Brand and his contingent have less than three weeks to develop a game plan for how they can re-sign their free agents, many of whom helped the team go down to the wire in a Game 7 against Toronto in this year’s Eastern Conference Finals. Bringing back those free agents was the Sixers’ goal when Ennis, Butler and Harris were acquired in separate trades during the season, and it’s still publicly and privately their primary goal today.

4 thoughts on “James Ennis On Potential Return To Sixers: “I Would Love To Come Back””