The Kings are working toward a deal with free agent forward Harrison Barnes that would be worth approximately $88MM over four years, according to Carmichael Dave of The Drive 1140 (via Twitter). 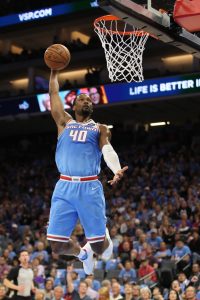 Marc Stein of The New York Times corroborates the report, tweeting that he has heard Sacramento plans to offer Barnes a four-year contract worth nearly $90MM when free agency opens on Sunday.

Barnes had a player option for the 2019/20 season that would have paid him more than $25MM, but opted to turn it down. Based on today’s update, it’s clear why he went in that direction — if he and the Kings finalize an agreement in the four-year, $90MM range, it wouldn’t be quite worth $25MM annually, but it would give him substantially more long-term security than his option would have.

When the Kings acquired Barnes from Dallas during the season, reports indicated that the team viewed him as its answer at small forward. However, head coach Dave Joerger ended up frequently using his new acquisition at the four. Presumably, Sacramento’s front office and new head coach Luke Walton are aligned on how to best use Barnes going forward.

Even if they complete a deal with Barnes, the Kings should have significant cap room left over to address other positions, including center. Sacramento’s exact cap-room figure will hinge on what they do with potential restricted free agent Willie Cauley-Stein and non-guaranteed guard Yogi Ferrell, among others. But the club could theoretically get up to $40MM+ in space after signing Barnes.

The Kings have been linked to free agent centers like Al Horford, Brook Lopez, and Nikola Vucevic, as well as veteran point guard Patrick Beverley. They should still have the flexibility to pursue a center and Beverley after locking up Barnes.