11:09pm: The Lakers have officially signed Bradley, the team announced tonight (via Twitter). 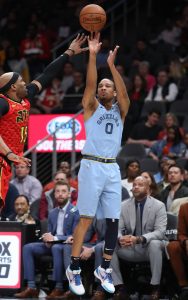 Los Angeles still has its full $4.8MM room exception available, so Bradley will slot into that exception now that the club has used all of its cap room. The second year of his new deal will be a player option, Wojnarowski notes.

Bradley, 28, has bounced around the league since spending the first seven seasons of his NBA career in Boston. The Celtics traded him to the Pistons during the 2017 offseason, but he was subsequently flipped to the Clippers and then the Grizzlies.

However, his $12.96MM salary for 2019/20 was only partially guaranteed for $2MM, and the rebuilding Grizzlies decided to create some extra cap flexibility by releasing him on Saturday and avoiding that guarantee. As cap guru Albert Nahmad observes (via Twitter), Memphis will also get to set off $1.66MM of that $2MM as a result of Bradley’s new deal with Los Angeles.

Bradley will slot into a Lakers backcourt that features Rajon Rondo and Quinn Cook at the point, with Danny Green, Troy Daniels, and Kentavious Caldwell-Pope among those who could see time at the two. Alex Caruso will also be in the mix.

By my count, the Lakers now have 13 players lined up for their regular-season roster, plus unsigned second-rounder Talen Horton-Tucker, who figures to occupy one of the final two roster spots. If the club adds a 15th man via free agency, he’ll have to sign a minimum-salary contract. Zach Norvell Jr. and a second two-way player will also factor into the equation.