JULY 3: Hezonja’s new deal with the Blazers is official, according to the team, which issued a press release today to announce it. 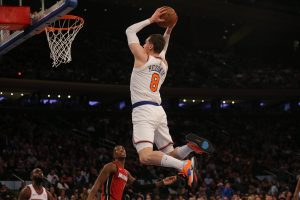 “Mario is a prodigiously talented player with a high ceiling and a bright future,” president of basketball operations Neil Olshey said in a statement. “He will have a chance to contribute immediately while we work to accelerate his development.”

JUNE 30: The Trail Blazers will sign Mario Hezonja to a two-year, minimum-salary deal, Adrian Wojnarowski of ESPN.com tweets. The second year of the pact will be a player option.

Hezonja is coming off an uneven season for the Knicks. The former top-1o pick struggled to find a consistent role for parts of the 2018/19, though he did look impressive as a point guard/facilitator once he received the chance during New York’s final contests.

Portland traded away Evan Turner this offseason and while they received Kent Bazemore in return, they’ll miss Turner’s ball handling. Bazemore projects to be a good fit in Portland’s offense, though he doesn’t have the play-making ability to regularly handle second-unit opportunities.

Hezonja should have an opportunity to secure that role and improve his stock on a talented Portland team. The Croatian-born wing is positioned to re-enter the market next offseason if things go well.