JULY 10: Zubac has signed his contract, per an official release from the Clippers. 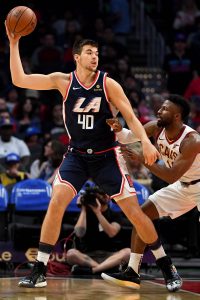 Zubac, 22, was dealt from the Lakers to the Clippers along with Michael Beasley in exchange for Mike Muscala in a midseason trade that was viewed as a coup for the Clips.

Appearing in 26 games the rest of the way for his new team, Zubac established himself as the Clippers’ starting center, averaging 9.4 PPG, 7.7 RPG, and 1.5 APG in 20.2 minutes per contest.

Because he came into the league as a second-round pick and was on a minimum-salary contract last season, Zubac had a cap hold of less than $2MM as a restricted free agent. That allowed the Clippers to keep him under team control without having to renounce his rights to create the cap room necessary to sign Leonard.

Zubac will officially sign his new deal once L.A. has exhausted its cap space, since the team will be able to exceed the cap to lock him up.

Zubac will rejoin Montrezl Harrell in the frontcourt in 2019/20, as the two young big men appear set to play most of the minutes at center for the Clippers.