JULY 11: The Mavericks have officially re-signed Finney-Smith, the team announced today in a press release. 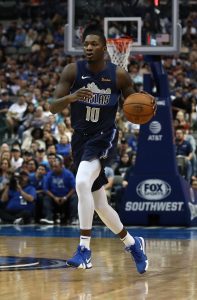 JULY 2: The Mavericks will bring back restricted free agent Dorian Finney-Smith on a three-year, $12MM contract, tweets Shams Charania of The Athletic.

The third-year forward signed with Dallas in 2016 after going undrafted out of Florida. He missed most of the 2017/18 season with tendinitis in his left knee, but bounced back strong this year, averaging 7.5 points and 4.8 rebounds in 81 games.

Dallas is emphasizing continuity and now has seven players whose contracts will run for at least three years, tweets Brad Townsend of The Dallas Morning News. Dallas is also pursuing Danny Green and may have room for another free agent as well.

The Mavs will be able to keep Finney-Smith’s sub-$2MM cap hold on their books and make their other offseason moves before going over the cap to lock up the forward using his Bird rights.