JULY 1: The Kings have reached an agreement to sign Cory Joseph, reports Chris Haynes of Yahoo Sports (via Twitter). According to Haynes, the free agent point guard will receive a three-year, $37MM commitment from Sacramento. Sam Amick of The Athletic reports (via Twitter) that the third year is partially guaranteed. 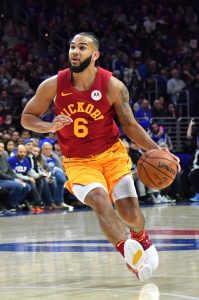 The agreement caps a busy day for the Kings, who filled a series of holes on their roster, adding quality depth via the free agent market. In addition to striking a deal with Joseph, the Kings agreed to re-sign Harrison Barnes and will add outside free agents Trevor Ariza and Dewayne Dedmon.

In Sacramento, Joseph figures to back up – and perhaps play alongside – promising young point guard De’Aaron Fox.

ESPN’s Bobby Marks indicated after the earlier moves that Sacramento would have about $13MM in space remaining if Cauley-Stein’s cap hold was removed from the books, so Joseph’s deal will use just about all of that space. The Kings still have the room exception available.