JULY 16: The Kings have officially signed Holmes, the club announced today in a press release.

JULY 1: The Kings and big man Richaun Holmes have reached an agreement on a two-year deal worth $10MM, reports Shams Charania of The Athletic (Twitter link). 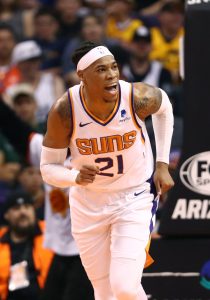 Based on the reported terms of Holmes’ new deal and the other agreements the Kings have finalized during free agency, it appears likely that he’ll receive the team’s $4.8MM room exception.

Holmes, 25, spent his first three NBA seasons in Philadelphia before being sent from the Sixers to Suns a year ago. He averaged 8.2 PPG, 4.7 RPG, and 1.1 BPG in 70 games (16.9 MPG) as a regular part of Phoenix’s frontcourt rotation.

The Kings have now reached agreements with four outside veteran free agents in addition to bringing back their own free agent forward Harrison Barnes on a four-year deal.

As our free agent tracker shows, Cory Joseph, Trevor Ariza, and Dewayne Dedmon will also be joining the club once they can officially sign contracts this weekend.