Celtics guard Marcus Smart has been added to USA Basketball’s training camp roster for the FIBA World Cup this summer, Shams Charania of The Athletic tweets. Veteran forward Thaddeus Young, who signed with the Bulls in free agency this summer, has also been invited to participate, Charania adds in another tweet. 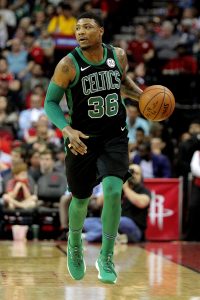 The move was necessitated by the flurry of defections from the original 20-man roster. Anthony Davis, James Harden, Bradley Beal, CJ McCollum and Eric Gordon have already withdrawn from Team USA participation this summer, starting with training camp in Las Vegas in August. Two other players, Damian Lillard and Kevin Love, are also undecided and will announce their decisions in the next few days.

The roster will be trimmed to 12 players for the World Cup in China. Smart, who averaged 8.9 PPG, 4.0 APG and 1.8 SPG last season, would give coach Gregg Popovich a versatile defensive option if he makes the final cut.

Smart joins new teammate and backcourt partner Kemba Walker, who is on the original 20-man roster. That list of 20 invitees to the USA Basketball camp can be found here. Smart signed a four-year deal with Boston last summer.