JULY 17: The signing is official, the Suns announced on Twitter.

JULY 1: The Suns and free agent big man Frank Kaminsky have reached an agreement on a two-year deal worth approximately $10MM, tweets Adrian Wojnarowski of ESPN. 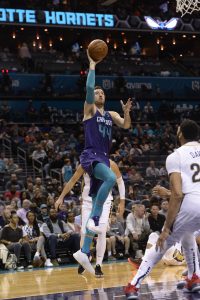 Phoenix is expected to complete the signing using the team’s $4.8MM room exception after using up all of its cap space to sign Ricky Rubio to a three-year, $51MM contract.

Kaminsky, the ninth overall pick in the 2015 draft, was the subject of trade and buyout speculation earlier this year as he fell out of the Hornets’ rotation for several weeks. The 26-year-old ultimately earned a more regular role in the second half, but had a down year in Charlotte, averaging 8.6 PPG and 3.5 RPG in 47 games (16.1 MPG).

Kaminsky didn’t receive a qualifying offer from the Hornets, so he entered the market as an unrestricted free agent. Despite a somewhat disappointing stint in Charlotte, he still has some upside as a stretch big man.

The Suns, whose Ryan Anderson experiment failed last season, have now lined up deals for two bigs who can knock down three-pointers. In addition to agreeing to sign Kaminsky, they’ll also acquire Dario Saric in a trade with the Timberwolves once the July moratorium ends.