JULY 2, 4:31pm: Free agent center Willie Cauley-Stein has decided to join the Warriors, according to Marcus Thompson of The Athletic (Twitter link). Chris Haynes of Yahoo Sports confirms (via Twitter) that the two sides are in agreement on a deal. 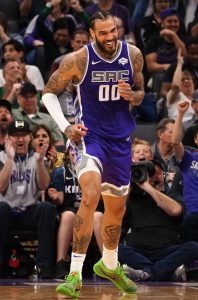 Although Cauley-Stein opened the free agent period as a restricted free agent, he didn’t stay restricted for long — the Kings rescinded his qualifying offer in order to create the necessary cap room to sign their other targets, including Cory Joseph. As a result, Cauley-Stein is free to sign outright with any team.

The sixth overall pick in the 2015 draft, Cauley-Stein spent the first four years of his NBA career in Sacramento, though it became increasingly clear as the Kings were linked to free agent centers in recent weeks that he probably wasn’t part of the club’s plan going forward. The Kings ultimately struck deals with Dewayne Dedmon and Richaun Holmes to address the five spot.

Cauley-Stein will head to another Pacific team in the Warriors, which is a little surprising, given the lack of cap flexibility for Golden State. The team is expected to fill out its roster with mostly minimum-salary players after hard-capping itself at the tax apron by acquiring D’Angelo Russell via sign-and-trade. However, Cauley-Stein will get a salary slightly above the minimum, tweets ESPN’s Zach Lowe.

In 81 games (27.3 MPG) for the Kings in 2018/19, Cauley-Stein averaged 11.9 PPG, 8.4 RPG, and 2.4 APG. He’ll join a new-look Warriors roster that will no longer feature Kevin Durant and Andre Iguodala in 2019/20. In the wake of the team’s agreement with Cauley-Stein, it also seems increasingly unlikely that DeMarcus Cousins will return.