7:01pm: The signing is now official, per a release from the team. 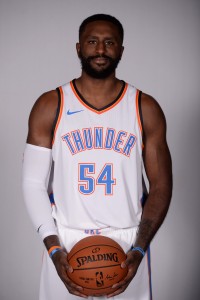 Wojnarowski first reported two weeks ago when Patterson agreed to a buyout with the Thunder that the veteran forward intended to sign with the Clippers once he cleared waivers. It seems that signing got somewhat delayed, but Woj’s report today confirms that the two sides are still on track to finalize a deal.

Patterson, 30, signed a three-year contract with Oklahoma City in 2017 after serving as a reliable stretch four off the bench for several seasons in Toronto. However, the former lottery pick struggled with injuries and inconsistencies during his two seasons with the Thunder, knocking down just 33.6% of his three-point attempts in 2018/19, well below his career rate of 36.7%.

With Oklahoma City in rebuilding mode and looking to duck under the luxury tax, it made sense for Patterson and the team to work out an agreement that removed his expiring deal from OKC’s books and freed up the veteran to join a contender.

Patterson reportedly gave up $3.5MM of his $5.7MM salary with the Thunder as part of his buyout agreement with the team, though he’ll make back about $2.33MM on a minimum deal with the Clippers. It will count for approximately $1.62MM on L.A.’s cap.

Once Patterson officially signs with the Clippers, the team will have 18 players under contract, including 14 on guaranteed deals and a pair on two-way pacts.