11:28pm: The extension is official, the Grizzlies announced on Twitter. 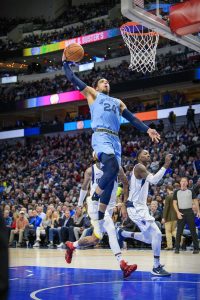 10:51pm: The Grizzlies have reached a three-year, $35MM extension agreement with Dillon Brooks, tweets ESPN’s Adrian Wojnarowski. Brooks had been on track to reach restricted free agency this summer.

Brooks’ new deal is fully guaranteed without any options, and will be worth $11.4MM in the first year, $12.2MM in the second and $11.4MM in the third, according to Chris Herrington of The Daily Memphian (Twitter links).

The 24-year-old swingman has been an important part of Memphis’ resurgence and the team’s surprising run at a playoff spot. He’s posting career highs across the board in his third NBA season, averaging 16.1 points, 3.4 rebounds and 2.1 assists per game. He has reclaimed his place in the starting lineup after being limited to 18 games in an injury-plagued 2018/19.

Brooks has also emerged as a vocal leader on the team. He called out Andre Iguodala earlier this week for electing to sit out rather than play for Memphis and said he couldn’t wait to face him on the court once he was traded.

After years of salary-cap issues, the rebuilt Grizzlies now have plenty of room going forward, so Brooks’ salary won’t be an issue. His extension is the first of what should be several long-term deals that Memphis will hand out to its young talent.