MARCH 9: The Clippers have officially signed Noah to his 10-day contract, sources tell Jovan Buha of The Athletic (Twitter link). The deal will run through March 18, covering the club’s next five games. 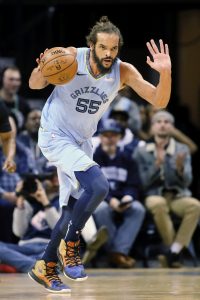 According to Wojnarowski, Noah is expected to officially join the team next week. No corresponding roster move will be required, since L.A. has an opening on its 15-man roster.

Noah’s deal with the Clippers will start as a 10-day contract, a source tells Shams Charania of The Athletic (Twitter link). That will give the club a chance to audition Noah and potentially change course if things don’t go well. Presumably, if it’s a good fit, a rest-of-season agreement will follow.

Noah, 35, last played in the NBA for the Grizzlies, appearing in 42 games during the 2018/19 season and averaging 7.1 PPG, 5.7 RPG, and 2.1 APG in 16.5 minutes per contest. The big man reportedly had a workout lined up with the Clippers last September, but was forced to cancel it after suffering an injury.

Noah published an Instagram video in late January showing him training and confirming that he had been recovering from an Achilles injury. He stated at the time that he was looking to make a return to the NBA, with a post-deadline report suggesting that he was “fully healthy” and remained an option for the Clippers. The Nuggets were also said to be considering the veteran free agent.

In Los Angeles, Noah will provide frontcourt depth for a Clippers team that had been on the lookout for a true center with size. Montrezl Harrell and Ivica Zubac have done an admirable job handling the five for L.A. this season, but neither player is necessarily an ideal matchup for the NBA’s standout traditional centers.

The Clippers’ potential path to the Finals may require them to get past big men like Anthony Davis, Nikola Jokic, Rudy Gobert, and/or Steven Adams, so it makes sense that the team wants one more defensive-minded option up front, just in case.