Hoops Rumors is looking ahead at the 2020/21 salary cap situations for all 30 NBA teams. Due to the coronavirus pandemic and its impact on the NBA calendar, it’s impossible to know yet where the cap for 2020/21 will land. Given the league’s lost revenue, we’re assuming for now that it will stay the same as the ’19/20 cap, but it’s entirely possible it will end up higher or lower than that.

It was another dismal season for the Knicks, who were on track to miss the playoffs for a seventh consecutive year when the season was suspended in March. And while RJ Barrett and Mitchell Robinson look like potential long-term building blocks, former top-10 picks Kevin Knox and Frank Ntilikina still aren’t producing consistently for the club.

The good news? The Knicks have a new president of basketball operations (Leon Rose) who will likely bring in a new head coach and some new voices in the front office. Plus, with plenty of cap flexibility going forward, the team isn’t locked into the current roster.

Here’s where things stand for the Knicks financially in 2020/21, as we launch our Salary Cap Preview series: 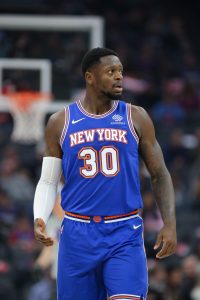 In theory, the Knicks could operate as an over-the-cap team if they retain all of their veterans with team options or non-guaranteed salaries. In reality, I’d expect only two or three of those players to be back. Besides Robinson, who will obviously be retained, Bullock looks like a solid value, and Gibson and/or Payton are candidates to stick around.

Even if they retain all of those players, plus their guys on guaranteed deals and their two first-round picks, the Knicks project to open up more than $25MM in cap space, assuming the cap doesn’t drop from its 2019/20 level. Moving on from Gibson, Payton, and/or Bullock would push that number even higher and could result in New York having the second- or third-most room of any NBA team this offseason.