NOVEMBER 24: The Bucks have officially re-signed Connaughton, according to the NBA’s transactions log. 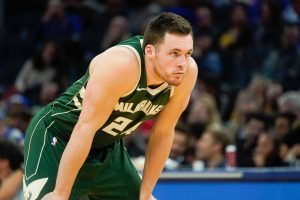 NOVEMBER 21: The Bucks and Connaughton have adjusted their agreement and will now complete a three-year, $16MM deal, his representatives at Excel tell Wojnarowski (Twitter link).

The Early Bird/player option noted below likely played a part in this renegotiation, as Milwaukee would have had to use part of its mid-level exception to complete the deal that was initially reported. Now the Bucks will be able to use their Early Bird rights on Connaughton while using their mid-level on D.J. Augustin.

NOVEMBER 20: The Bucks have reached an agreement on a two-year deal for free agent guard Pat Connaughton, his agents inform ESPN’s Adrian Wojnarowski (Twitter links). According to Woj, the two-year contract will be worth $8.3MM with a player option in year two.

The Bucks held Early Bird rights on Connaughton, allowing them to re-sign him without dipping into their mid-level or another exception. However, players signed using Early Bird rights aren’t permitted to get a second-year option in their contracts, so it seems like something’s got to give there.

Milwaukee will continue to seek ways to upgrade its roster after its rumored sign-and-trade deal for Bogdan Bogdanovic fell apart earlier this week.