NOVEMBER 25: The Clippers have officially announced the re-signing of Morris, via a team press release. 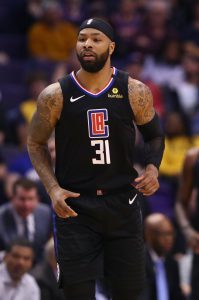 NOVEMBER 22: The Clippers and Marcus Morris have reached an agreement on a new contract, according to ESPN’s Adrian Wojnarowski, who reports (via Twitter) that the veteran forward will sign a four-year, $64MM contract with the club.

Morris was one of Los Angeles’ top priorities this offseason, averaging 16.7 points and five rebounds per game last season with the Knicks and Clippers. He fit seamlessly alongside Paul George, Kawhi Leonard and others, adding three-point shooting and toughness on the defensive end.

Morris, who turned 31 in September, will likely remain in the team’s starting lineup next season. Prior to joining the Clippers, he held stints in Houston, Phoenix, Detroit, Boston and New York.

The Clippers had a disappointing playoff exit last season, blowing a 3-1 series lead to the Nuggets in the Western Conference Semifinals. The team has since fired Doc Rivers, overhauled its coaching staff under Tyronn Lue, and lost Montrezl Harrell to the rival Lakers in free agency.

In addition to reaching a deal with Morris, the Clippers also agreed to a new contract with veteran forward Patrick Patterson in free agency.