Wright To Pistons, Ariza To Thunder, Johnson To Mavs In Three-Team Trade

NOVEMBER 27: The Thunder, Mavericks, and Pistons have officially finalized their three-team trade, according to press releases from the teams. As detailed below, Ariza and Jackson are headed to Oklahoma City, Johnson is going to Dallas, and Wright moves to Detroit. 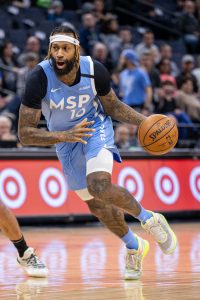 The Thunder also acquired a 2023 second-round pick (the more favorable of Dallas’ and Miami’s picks) and the Mavs’ 2026 second-rounder in the deal.

NOVEMBER 21: The Thunder, Mavericks, and Pistons have agreed to a three-team trade, according to reports from ESPN’s Adrian Wojnarowski (Twitter links) and Marc Stein of The New York Times (Twitter links).

The move will send James Johnson from Oklahoma City to Dallas and Delon Wright from Dallas to Detroit. The Thunder will receive Trevor Ariza (from the Pistons), Justin Jackson (from the Mavericks), and – unsurprisingly – some form of draft compensation.

From the Mavericks’ perspective, the deal will allow them to open up a roster spot and add some veteran toughness, according to Tim MacMahon of ESPN, who tweets that Dallas intends to keep Johnson on its roster. Moving Wright, who had two years left on his contract, and taking back Johnson’s expiring $16MM deal also allows the Mavs to create some added cap flexibility for the summer of 2021.

The Pistons will reduce team salary for 2020/21 and will reunite Wright with his former coach in Toronto, Dwane Casey. Having signed a three-year deal in Dallas in 2019, Wright had a decent year off the bench, averaging 6.9 PPG, 3.8 RPG, and 3.3 APG in 73 games (21.5 MPG). But he became expendable when the club acquired Josh Richardson earlier this week.

As for the Thunder, I’d be surprised if they have big plans for Ariza or Jackson — they simply saw another opportunity to pick up an extra draft pick to add to Sam Presti‘s constantly-growing collection.

Ariza, who is still technically a member of the Blazers, has now been part of trade agreements that will send him to Houston, Detroit, and Oklahoma City within the last few days. Those deals will all be completed after the transaction moratorium lifts on Sunday.

35 thoughts on “Wright To Pistons, Ariza To Thunder, Johnson To Mavs In Three-Team Trade”