The Hornets are signing Gordon Hayward, according to ESPN’s Adrian Wojnarowski, who reports (via Twitter) that the forward’s new deal will be worth $120MM over four years. It’s fully guaranteed, tweets David Aldridge of The Athletic. 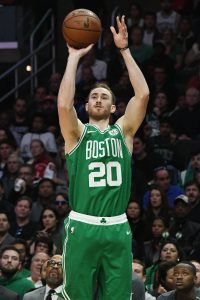 Hayward turned down a $34.2MM player option with the Celtics earlier in the week, which was a signal that he and agent Mark Bartelstein were confident that one or more lucrative multiyear offers would be waiting for him on the open market.

The Hawks and Knicks were said to have interest in Hayward, but Atlanta quickly moved onto other targets – including Danilo Gallinari – and New York wasn’t comfortable with either the years or the money that Hayward ultimately received from Charlotte, per Steve Popper of Newsday (Twitter link).

Hayward was said to prefer joining his hometown Pacers, and Boston and Indiana attempted to work out a sign-and-trade deal within the last couple days. However, the Pacers’ cap situation complicated matters, as Bobby Marks of ESPN notes (via Twitter), and it was always going to be a challenge for the C’s and Pacers to agree on fair compensation.

Just a half-hour before word of Hayward’s agreement with the Hornets broke, Scott Agness of Fieldhouse Files said (via Twitter) that there had been no progress in those sign-and-trade talks.

So Hayward will be headed to the Hornets, who will have to either open up some extra cap room in order to clear the space necessary to complete the signing. They’ll reportedly do so by using the stretch provision on Nicolas Batum.

Although the Hornets were cited on Friday as a potential suitor for Hayward, the deal still comes as a major surprise, especially since president of basketball operations Mitch Kupchak had talked for the better part of the year about Charlotte not planning to make a splash in free agency. Apparently, the team decided to change course on that plan when Hayward became available.

Hayward’s deal with the Hornets represents a full-circle moment, as the first free agent contract he signed in the NBA, back in 2014, was an offer sheet with Charlotte. The Jazz, of course, matched that offer and the former Butler standout spent the next six years in Utah and Boston, but now he’s finally joining the Hornets.