NOVEMBER 25: Favors’ new deal with the Jazz is now official, per the NBA’s transactions log. 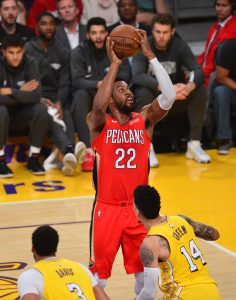 NOVEMBER 20: The Jazz and center Derrick Favors are reuniting, according to Tony Jones of The Athletic, who reports (via Twitter) that the two sides have reached an agreement on a deal.

Jones says the three-year pact will be worth about $27MM, with a third-year player option (Twitter link). That suggests that Utah is using nearly its full mid-level exception on Favors.

The Jazz and Favors have been linked for several weeks, with Favors spending time in Utah from 2011-2019. The team traded him to New Orleans last year in exchange for 2021 and 2023 second-round picks.

This past season, Favors averaged nine points, 9.8 rebounds and 24.4 minutes per game with the Pelicans, starting in 49 of his 51 contests. The veteran big man was drafted third overall back in 2010 after spending one season at Georgia Tech.

For Utah, Favors is expected to provide frontcourt production behind the likes of Bojan Bogdanovic and Rudy Gobert. The Jazz lost a grueling seven-game series to Denver in the first round of the 2020 NBA playoffs, playing without Bogdanovic due to injury.