NOVEMBER 22: The Lakers have officially re-signed Caldwell-Pope, the team announced in a press release.

NOVEMBER 21: Kentavious Caldwell-Pope is returning to the Lakers, according to Shams Charania of The Athletic (Twitter link), who hears from agent Rich Paul that the free agent swingman will get a three-year, $40MM deal to return to the defending champions. The third year of the contract will only be partially guaranteed, Charania notes (via Twitter). 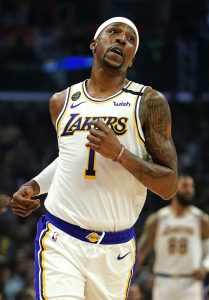 Having put up relatively modest numbers (9.3 PPG on .467/.385/.775 shooting) during 69 regular season games (25.5 MPG), Caldwell-Pope made some big shots in the playoffs, knocking down 42.1% of his three-point attempts in the first three rounds and then averaging 12.8 PPG in the Finals, the third-highest scoring average on the team behind LeBron James and Anthony Davis.

The Lakers’ trusted three-and-D wing turned down his $8.54MM player option in search of a raise in free agency and it wasn’t clear for the last 24 hours whether or not a reunion was in the cards.

According to Charania (via Twitter), KCP drew interest from several interested teams — previous reports indicated that the Knicks were among his potential suitors. However, Paul’s strong relationship with the Lakers helped seal the deal on a new agreement.

Having already committed to sign Montrezl Harrell with their mid-level exception and Wesley Matthews with their bi-annual exception, the Lakers will be hard-capped and don’t have a ton of room to maneuver, given the terms of Caldwell-Pope’s new deal.

As Eric Pincus of Bleacher Report tweets, it may mean Los Angeles is unable to offer Markieff Morris more than the minimum or that the club is unable to carry a full 15-man roster. Still, KCP was a priority, given his importance in the postseason, so the team will be satisfied to get him back and do what it can to fill out the rest of the roster.