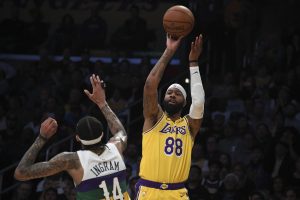 11:29am: Free agent forward Markieff Morris is sticking with the Lakers, announcing (via Twitter) his intentions to “run it back” with the defending champions. According to Shams Charania of The Athletic (Twitter links), Morris is signing a one-year, minimum-salary contract with the club.

Morris was said to be receiving interest from both Los Angeles teams and was reportedly considering reuniting with his twin brother Marcus Morris on the Clippers. The Raptors were also said to have interest before they agreed to a deal with Aron Baynes.

Although the Clippers had the financial flexibility to make Markieff a slightly more lucrative offer, it’s not clear if he took less to remain with the Lakers, or if the Clips were also offering the minimum.

After starting last season in Detroit, Morris was bought out and joined the Lakers for the stretch run. He played a limited role (14.2 minutes per game) in 14 regular season contests for the club, but actually saw his playing time increase to 18.3 MPG in the postseason.

With a commitment from Morris in place, the Lakers now project to be about $4.5MM below their hard cap with 12 players on the roster, according to ESPN’s Bobby Marks, who tweets that the team should be on track to add two more minimum-salary players to the mix. Marks’ projection assumes the team keeps Alfonzo McKinnie after acquiring him from Cleveland and waives Jordan Bell.

By virtue of re-signing with the Lakers on a one-year deal, Morris will have the ability to veto any trade that involves him in 2020/21, as Eric Pincus of Bleacher Report observes (via Twitter).