NOVEMBER 24, 12:02pm: The Magic have officially announced their new deal with Carter-Williams. 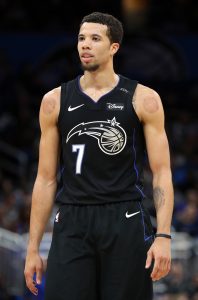 NOVEMBER 21, 11:32am: It’s a two-year deal for Carter-Williams, with no player or team option on the second year, tweets Josh Robbins of The Athletic. It’s believed to be worth in the range of $3MM per year, tweets Jeff Zillgitt of USA Today.

NOVEMBER 21, 8:00am: Free agent point guard Michael Carter-Williams has agreed to a deal to return to the Magic, reports Shams Charania of The Athletic (via Twitter). Terms of the contract agreement aren’t yet known.

With veteran guard D.J. Augustin unlikely to return to Orlando, there may be a path to a larger role in 2020/21 for Carter-Williams, a former Rookie of the Year, though that will depend on what other moves the Magic make this offseason.

The Magic have now made deals with two of their own free agents, agreeing to bring back both Carter-Williams and James Ennis. The team is also adding Dwayne Bacon on a two-year deal.