11:57pm: The deal is official, according to the Mavericks, who confirmed that they acquired Richardson and the rights to Tyler Bey (the No. 36 pick) from the Sixers in exchange for Curry. 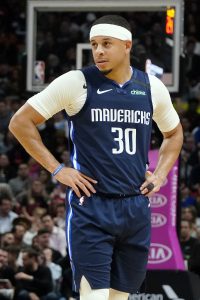 10:11pm: The Sixers are finalizing a trade to send Josh Richardson to the Mavericks, tweets Shams Charania of The Athletic. Dallas will also get the 36th pick in tonight’s draft and will send Seth Curry to Philadelphia, according to ESPN’s Adrian Wojnarowski (Twitter link).

Richardson, 27, was also traded last offseason, being sent from the Heat to the Sixers in the four-way deal that brought Jimmy Butler to Miami. He averaged 13.7 points and 3.2 rebounds in 55 games during his lone season in Philadelphia. He’s the second rotational player to be dealt by the Sixers today, following the agreement to send Al Horford to Oklahoma City.

Curry, 30, will bring some outside shooting to a team that struggled to make three-pointers last season. He shot a career-best 45.2% from beyond the arc last year and averaged 12.4 PPG, mostly in a reserve role. Curry is the son-in-law of new Sixers coach Doc Rivers.