NOVEMBER 22: The Pacers have issued a press release officially confirming their new deal with Holiday. 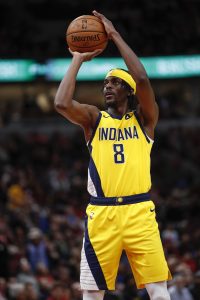 “Re-signing Justin was one of our main priorities going into free agency,” president of basketball operations Kevin Pritchard said in a statement. “His contributions last season were tremendous. He can play multiple positions and is extremely versatile. He also represents this franchise as a true professional, on and off the court.”

NOVEMBER 20: The Pacers are bringing back shooting guard Justin Holiday, according to Shams Charania of The Athletic, who reports (via Twitter) that the two sides have agreed to a three-year, $18MM deal. It’ll be fully guaranteed, tweets Ian Begley of SNY.tv.

After earning $4.77MM last season, Holiday was eligible for a starting salary worth up to 120% of that amount using his Non-Bird rights, and it appears that’s how the Pacers will re-sign him. The total value of his deal should be about $18.02MM, and Indiana will still have its mid-level exception available if needed.