NOVEMBER 25: The Clippers have officially signed Ibaka, the team announced in a press release. 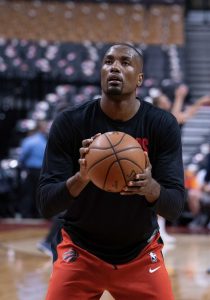 Adrian Wojnarowski of ESPN reports (via Twitter) that Ibaka will receive $19MM over two years on his new deal, signaling that Los Angeles will use its full mid-level exception to complete the signing. Charania adds (via Twitter) that the contract will feature a second-year player option.

The agreement represents a major coup for the Clippers, who lost center Montrezl Harrell to the rival Lakers early in free agency and saw power forward JaMychal Green leave for a deal in Denver. Ibaka, who can play either the four or five, will help replenish the team’s frontcourt depth, giving L.A. a big man who can knock down outside shots on offense and protect the rim on defense.

By committing their full mid-level exception to Ibaka, the Clippers will hard-cap themselves for the 2020/21 league year and they don’t have a whole lot of wiggle room below the $138.93MM apron. However, as ESPN’s Bobby Marks observes (via Twitter), the club can create a little extra breathing room by waiving non-guaranteed contracts for Joakim Noah and Justin Patton. Bringing back Noah on a new one-year, minimum-salary deal would cost the team about $1MM less than his current deal.

The Clippers remain in the market for a play-making guard and another big man, tweets Ohm Youngmisuk of ESPN. However, the team will likely be limited to minimum-salary offers or perhaps a portion of the bi-annual exception.

The Raptors, one of the many teams that made an effort to sign Ibaka, were believed to be averse to offering multiyear money, since it would compromise their projected cap room for the summer of 2021. They reportedly offered the big man a one-year, $12MM deal.