9:00am: Wojnarowski has another update on this deal, reporting (via Twitter) that George Hill will indeed end up with the Thunder rather than the Pelicans. New Orleans will also send Oklahoma City Darius Miller‘s $7MM expiring contract, Washington’s 2023 second-round pick, and Charlotte’s 2024 second-round pick, Woj adds. 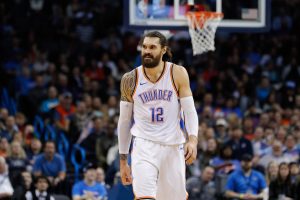 New Orleans is still acquiring Bledsoe in the multi-team trade, per Woj (Twitter link), so Miller’s contract will likely need to become fully guaranteed for salary-matching purposes and the Pelicans will still probably have to send out a bit more salary. So I expect there are still more parts of this deal to be reported.

ESPN’s Bobby Marks notes (via Twitter) that Adams may also need to amend his trade kicker to make the money work.

12:41am: The lottery-protected 2023 first-round pick that the Nuggets agreed to send to the Pelicans on draft night in order to land RJ Hampton will be rerouted to Oklahoma City as part of this deal, according to ESPN’s Adrian Wojnarowski (via Twitter). The Thunder will also receive two future second-round picks from New Orleans, per ESPN.

12:00am: Having already traded away guards Chris Paul and Dennis Schröder, the Thunder are now finalizing a trade that will send veteran center Steven Adams to the Pelicans, according to Shams Charania of The Athletic (Twitter link).

The deal is becoming a part of the Jrue Holiday blockbuster that New Orleans and the Bucks previously agreed upon, according to ESPN’s Adrian Wojnarowski, who reports (via Twitter) that the Holiday trade will expand to include more teams and players. It still has “a lot of moving parts” and will take some work to finish, tweets Wojnarowski.

The Thunder will be receiving a first-round pick and second-round picks as part of the expanded swap, per Woj (Twitter link).

While it’s tricky to evaluate the deal before we know all those moving parts, we can at least break down Adams’ fit in New Orleans. He’ll fill the hole in the frontcourt created by the free agent departures of Derrick Favors and Jahlil Okafor earlier this evening. The Pelicans were said to have interest in Aron Baynes, among other big men, but it looks like Adams will be the team’s new man in the middle.

With the Pelicans now taking on Adams’ salary, it seems likely that at least one of the point guards they were set to receive in the Holiday trade – Eric Bledsoe and George Hill – will be rerouted elsewhere — most likely to OKC.