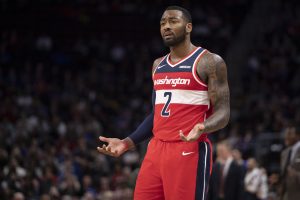 Sheppard, who said he was just watching Wall work out this morning, told the media that – with Wall and Bradley Beal set to play together for the first time since 2018 – it’s a new chapter for the Wizards’ two star guards, rather than a “sequel.”

“I can’t wait to see those two together,” he added (Twitter link via Youngmisuk).

A report last week indicated that Wall had made it clear he wants to be traded out of Washington. However, Sheppard, who said that he and Wall speak every other day, said the five-time All-Star has never asked him per a trade, per Chris Mannix of SI.com (Twitter link).

Even if Wall does want to be dealt, he has little leverage to force the issue. With three years and $133MM left on his deal, the 30-year-old has one of the NBA’s least team-friendly contracts. He’s also spent nearly two full years rehabbing various injuries.

While Wall has apparently looked great in workouts, per Marc Stein of The New York Times (Twitter link), teams would be extremely wary about taking on that contract without having seen him play since 2018. In other words, it wouldn’t make sense for the Wizards to make a deal when Wall’s stock is so low.

The team plans to manage Wall’s workload this season, reducing his minutes and likely sitting him during one half of back-to-back sets.

With Wall and Beal reunited in the backcourt and Davis Bertans back in the fold, the Wizards hope to make it back to the postseason in 2021. The team also drafted Deni Avdija last week and signed veterans Robin Lopez and Raul Neto in free agency. Those newcomers will join a roster that also features Rui Hachimura, Troy Brown, and Thomas Bryant.

20 thoughts on “Wizards’ GM: No Plans To Trade John Wall”